David (age 31) and Laura (age 30) are going to be new parents very soon. They have a newborn baby on the way, and they hope to expand their family in 2-3 years with a second. They have an aggressive plan; they want to plan for parental leaves with each new baby and then financial independence by age 50.

They are high income earners in tech and sales, with a combined household income of $228,000 and growing. They like the idea of financial independence and have been working towards that goal for a few years. They’ve been saving over 50% of their income but now they wonder if they should take a bit of time off with their new family even if it means a lower savings rate. Taking time off now would mean delaying financial independence but it’s a trade-off they want to explore. They would like to create a few different scenarios to understand how these competing priorities impact their long-term plan.

Scenario 1 would involve working straight through until financial independence at age 50 (earlier if possible). This scenario would incur childcare costs and would require a high savings rate.

Scenario 2 would involve taking time off now, David would stay at home with their children until they enter public school, and Laura would take 12-months off with each new baby. This would give them two whole years off together as a family. They would be willing to trade a later retirement date at age 55-60 for this extra time now. This scenario would avoid childcare costs but would mean less income and a lower savings rate. In total they would have two whole years off together as a family and David would be off work for about 6-years in total.

Laura gets a 100% match on contributions to her Defined Contribution Pension Plan up to 6% of salary.

With a custom financial plan, David and Laura, who are soon to be new parents, can explore a few different options for their young family and find the right balance between their future goal of financial independence while still enjoying their time now as a young family.

David and Laura have an impressive household income and net worth for their age. With some careful planning they’ll be able to take time off for parental leave and still retire early. To explore the different options, we looked at the three scenarios. First, we look at Scenario 1, an early 50’s retirement with annual after-tax spending of $72,000 per year. Thanks to their modest spending and high household income this scenario is very successful, and they even continue to maximize TFSAs each year in retirement and accumulate wealth late into retirement. Based on how much they’re saving they could even retire earlier in this scenario. 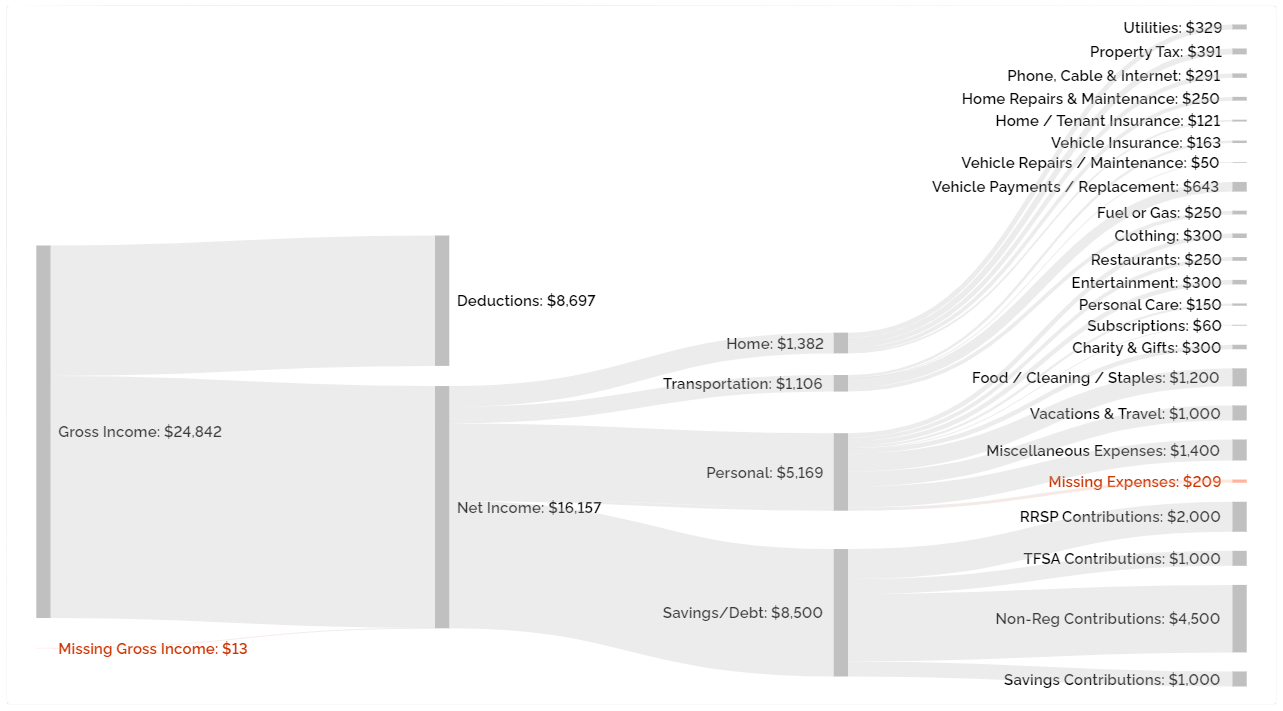 With Scenario 1 looking good we could now look at Scenario 2, where David would take 6-years off while the children are young, and Laura would take two 12-months leaves with each new baby. This is a lot of time off and has a large impact on household income. This option would give them two full years together as a young family. Household income in this scenario drops considerably over the next 6-years. Their savings rate would drop to nearly zero but thanks to their modest spending and Laura’s income they wouldn’t need to dip into savings. They would let their existing financial assets “coast” for 6-years without any major contributions. This scenario is still very successful and once David is back to work full time their savings rate goes back to 50%+ and they can start working towards FIRE again.

The last scenario we did had the same income assumptions as scenario 2 but included some extra spending once David is back to work full time. This decreased their savings rate a little bit but provides a better balance between spending and saving. We tested an additional $18,000 per year in discretionary spending. This could be for vacations/travel, hobbies, entertainment, camps/activities etc. This plan is slightly less successful and with such a long retirement period there is 1 in 4 a chance of running out of money in the future especially if they face a period of poor investment returns in early retirement. Laura and David would need to treat this extra spending as entirely discretionary and cut back if investment returns are poor or inflation rates are high, especially between age 50 and age 65-70 when CPP and OAS begin.

Laura and David have a solid plan. They’ve set themselves up well for the future with a great household income, modest spending, and a high savings rate. As new parents they have a lot of options for time off, both now and in the future.

Despite their high household income, they’ve been able to minimize income tax and maximize government benefits like the Canada Child Benefit. They’ll be able to perfectly split income in retirement, keeping income tax as low as possible in the future.

With a little bit of spending flexibility, they’ll also be able to spend more now, finding a better balance between saving and spending.

Laura and David will still be able to reach their goal of financial independence, even if they take some time off now. They can enjoy this time as a young family and won’t have to worry about the future.

With so many changes happening over the next few years Laura and David plan to revisit their plan every 6-months with an advice-only financial planner. They loved the detail within the financial plan and appreciate the accountability of regular updates.

Want to see David and Laura’s plan in more detail? Click the link below to see their “PlanEasy Public Dashboard” that includes all their income and spending information, detailed projections, and success rate.