The Canada Pension Plan is expanding this year and that’s going to make retirement easier in the future. This expansion is part of a multi year effort to increase the size of CPP payouts in the future. The increased CPP benefits will make retirement easier for many people. It will mean less personal savings are needed for retirement and if you continue to save at the same rate as today you might actually be saving too much!

CPP is one of the best pension funds in the world. Actuaries have stated that CPP is solvent for 75+ years. That means anyone contributing to CPP now has very little to worry about when it comes to future CPP payments.

Despite Canada Pension Plan being one of the best pension in the world I still come across comments from people who are negative about CPP and OAS. They prefer not to count these retirement pensions in their financial plans. Instead they prefer to save more for retirement.

While I understand the desire to be prudent, this line of thinking makes things more difficult than they need to be. Retirement pensions like CPP and OAS provide an enormous amount of retirement income and ignoring them just means you have to save more.

Ignoring CPP and OAS is like running in a windstorm with a parachute tied to your back!

Why add that extra resistance when it’s already hard enough to save for retirement?!?

The good news for many people is that CPP enhancement will now fund even more of their retirement. Future CPP payments will make up an even higher % of retirement income. Before CPP reform the original goal for CPP was to cover 25% of earnings (up to the max) but with CPP enhancement the goal is to increase this to cover 33% of earnings (with a higher max too!). The result is that CPP payments will be up to 50% higher in the future!

This expansion will happen in two phases and the impact on your financial future will depend on how much you’re earning today and how long you’ll contribute under the new rules.

The new Canada Pension Plan expansion won’t impact everyone equally, some people will gain more than others. Let’s look at the two phases of the expansion and how it will impact us.

With expanded CPP the contribution rate will increase to 5.95% over a period of 5-years starting in 2019 and ending with the last increase in 2023.

This will impact everyone equally and will lead to future CPP payments being 33% higher than they are today. The complication for anyone who has already contributed to CPP is that their future CPP payments will be a blend of the old payment and the new enhanced payment.

The second phase of CPP expansion will see the income maximum increase by 14%. This will be phased in over two years starting in 2024.

Using today’s numbers as an example (remember, this is an example only, this part of the enhancement will only take effect in 2024) the expansion of the earnings maxim means that anyone earning under $57,400 today would not be affected by this second phase of the CPP expansion, but anyone earning between $57,400 and $65,436 would pay 4% of their earnings between those amounts into the new expanded CPP. Along with higher contributions, these individuals will also benefit from higher CPP payments in the future.

This change will only impact individuals who are already above the current income threshold, so for average income earners this is not a big benefit. For higher income earners they could see their future CPP payments increase. 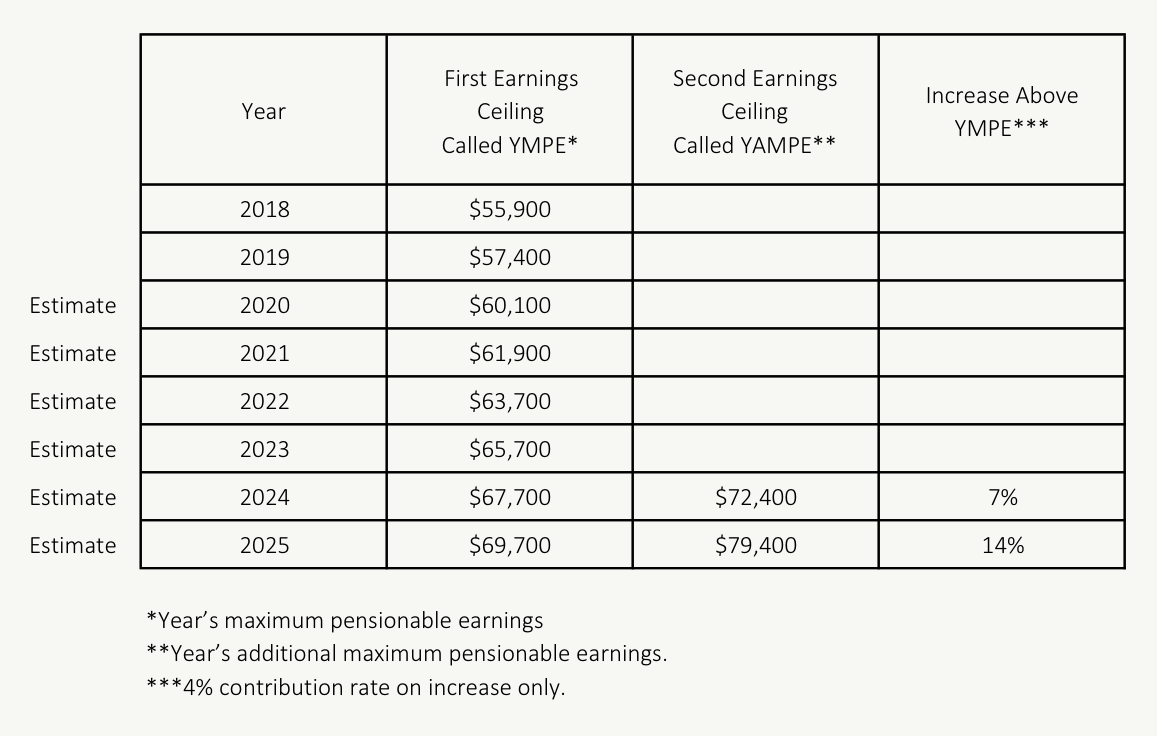 CPP Estimates Will Be Harder To Do In The Future

One negative impact of this expanded CPP is that estimating CPP benefits in retirement will become harder to do in the future. Estimating CPP was already difficult, there are multiple factors that can affect your CPP. CPP expansion will now be another factor to consider when planning how much to save for retirement.

Younger employees, those who make more contributions under the new expanded CPP, will see higher CPP payouts in the future and may need to save less for retirement. With CPP payments possibly being $500+/month higher in the future this could mean less savings/investments are required to reach the same level of retirement income.

Older employees, those who have made the majority of their contributions under the old CPP will see more modest increase in the future. How much their CPP payouts increase will be directly proportional to how many years they contributed to the expanded CPP. They could see their monthly payments increase by $1.44/month at a minimum and perhaps increase by $53.25/month if they continue to contribute for the entire period of expansion until 2025.

GIS Will Get Smaller As CPP Gets Larger

Another negative impact of expanded CPP is that average GIS payments will get smaller in the future. GIS is the Guaranteed Income Supplement and is paid to nearly 1/3rd of seniors in Canada. The structure of GIS isn’t changing, but with higher CPP payments there will be higher claw backs on GIS in the future.

GIS acts as a safety net for very low-income seniors, potentially providing payments of $10,000+ per year to the lowest income earners. Because GIS is a safety net it has high claw back rates, meaning that if your income increases, for example by $100, your GIS would be clawed back by $50 to $75.

CPP payments trigger GIS claw back. So, if CPP goes up by $100 per month thanks to the expansion, GIS would decrease by $50 to $75 per month.

This claw back that means that future seniors who would have received GIS either will no longer qualify thanks to expanded CPP or they will see their GIS payments decrease by 50% to 75% of the CPP increase they receive.

This means that for lower-income individuals and families the CPP expansion is less of a good thing. They will be paying into the new expanded CPP at the full rate but will only get 50% to 25% of the net benefit after these other government programs are taken into account.

How Will Enhanced CPP Affect You?

For the most part, enhanced CPP will be a good thing. It’s going to make saving for retirement a lot easier for many people. It will provide up to 50% more CPP than the current system and it will cover an even larger percentage of people’s retirement income needs.