When Does Compounding Take Hold? When Do We FEEL It?

Technically compounding begins with the first dollar, but when does compounding exactly take hold, when do we really start to FEEL the effect of compounding?

Compounding is almost like magic. It turns even the smallest amount of money into millions if given enough time.

Ben Franklin bequeathed $2,000 to the cities of Boston and Philadelphia in his will BUT with the stipulation that they could not draw on the investments for 200-years. The original amount has compounded over 200-years from $2,000 to $6.5 million!

But do you have to wait for 200-years to feel the effect of compounding? Definitely not.

How Long Does It Take To FEEL The Effect Of Compounding?

This is somewhat subjective, but in my opinion, compounding doesn’t take hold until annual investment gains exceed annual contributions.

Once growth is greater than contributions it starts to feel like the wind is at your back. It feels like you’ve crested a large hill and now you’re starting to gain momentum going down the other side.

But those first few years can feel like a real slog. A $6,000 contribution may only generate $330 in investment growth the first year. Relative to the scrimping and saving it took to save $6,000 that $330 gain can feel like a pittance. It can FEEL like compounding isn’t working, but the reality is that compounding is doing the same in year one with a $330 return as it is in year 30 with a $25,548 return. It just takes a bit more time to really FEEL it.

If we assume a 5.5% average return, it will take around 13 years to reach the point where annual growth exceeds annual contributions. This is when we can really FEEL compounding take hold. 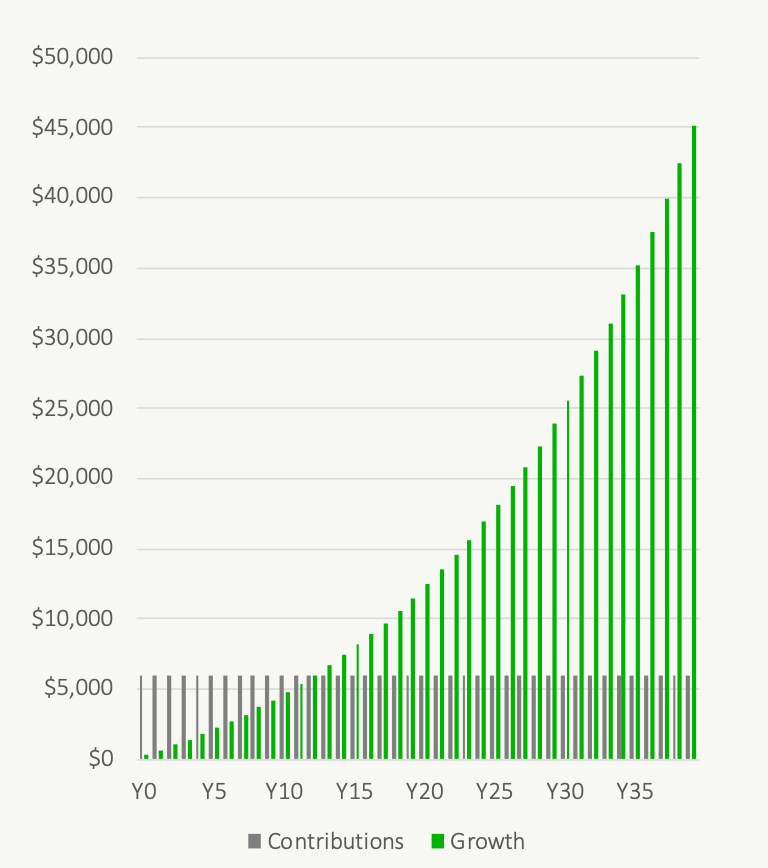 FEELING The Effect Of Compounding Depends On Investment Returns

Higher investment returns actually helps us FEEL the effect of compounding much faster. This actually creates a strong feedback loop where higher returns encourage more saving/investing which in turn provide even higher returns.

During a period of above average investment returns (like we had in the 2010’s) this helps us FEEL the effect of compounding much faster. Assuming a 10% return and $6,000 annual contributions, it takes until just after the start of year 7 for investment growth to exceed contributions. 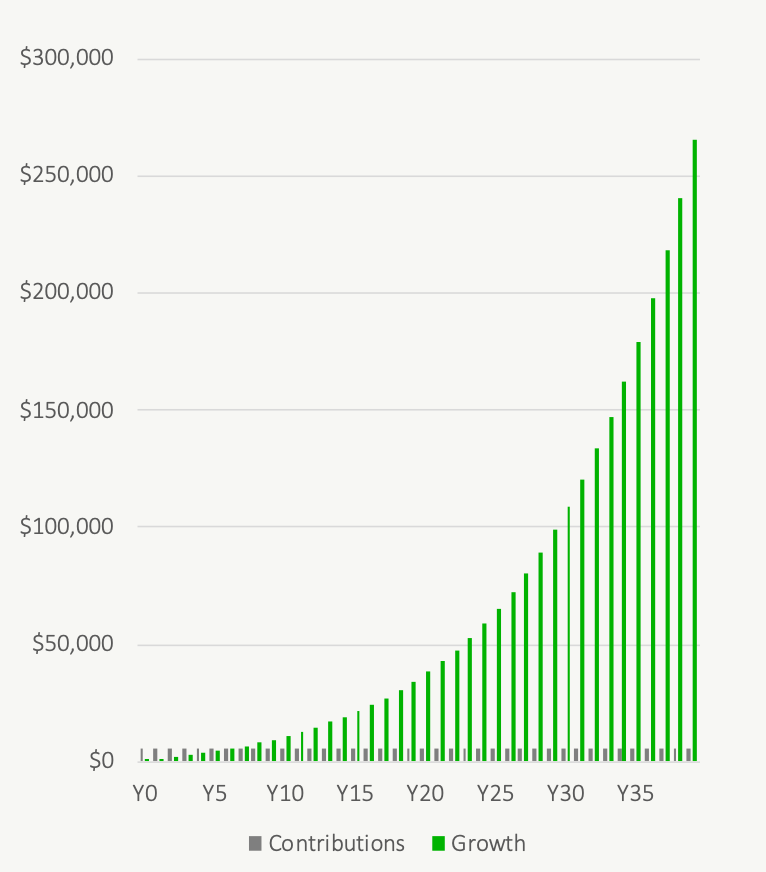 But the opposite could also happen. During a period of below average investment returns the effect of compounding can take a very long time to take hold. With a 3.0% return it takes 23-years to reach the point where investment growth starts to exceed contributions. 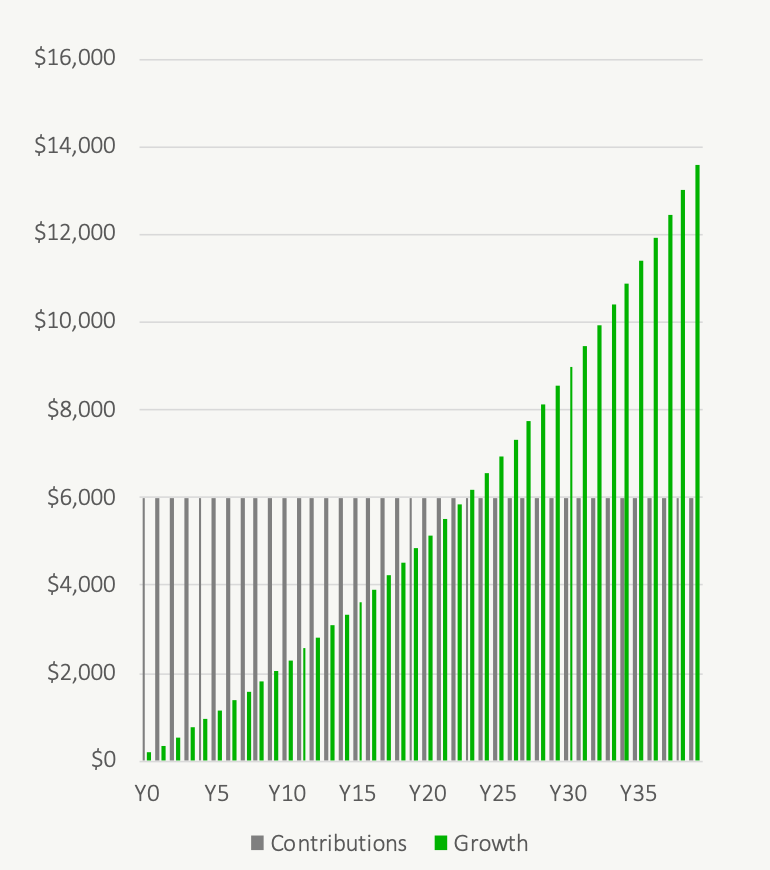 And if we SAVE rather than INVEST it takes even longer! With a 1.5% return even after 40-years we still don’t have investment returns that are higher than contributions! 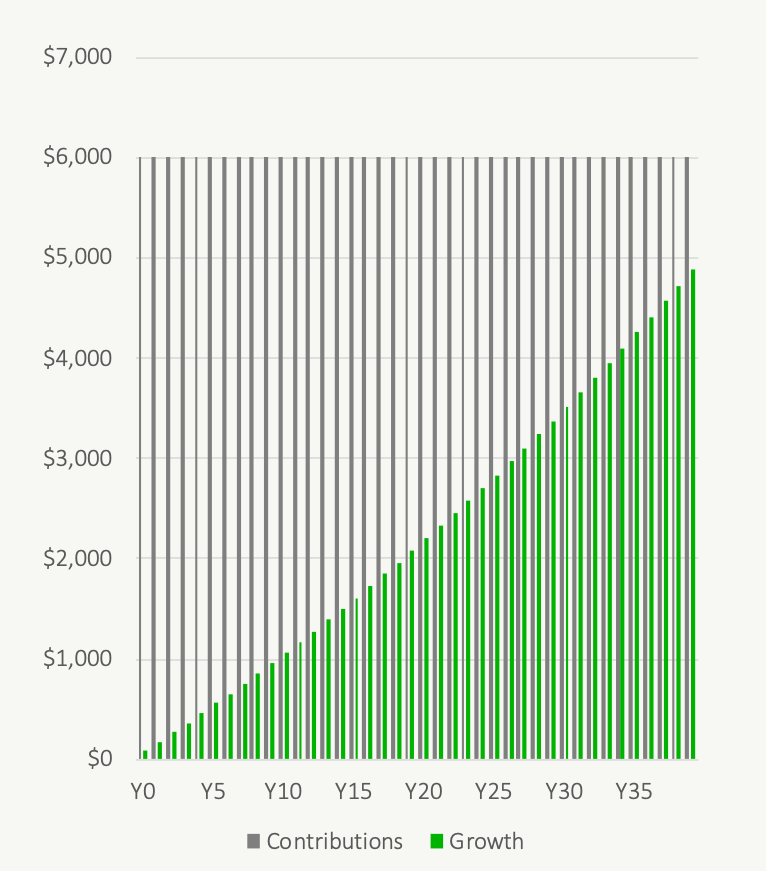 Why Does FEELING Compounding Matter?

The problem with compounding is that it doesn’t FEEL like it’s working in the beginning. A $6,000 TFSA contribution may only grow by $330 in year 1 (assuming a 5.5% average return). This $330 return feels like peanuts versus $6,000 in contributions. It feels like compounding isn’t working and this makes it harder to stick to a savings and investment routine.

Understanding not only the math behind compounding but also the psychology can help make those early years a little less of a slog, because once that hill is crested the momentum of compounding makes things much, much easier.