The RRSP is a great financial planning tool. Investments grow tax-free within the account. Contributions to an RRSP reduce taxable income. And in some unique circumstances, it may even be advantageous to make contributions in one year and then deduct them in future years.

RRSP contributions and withdrawals will decrease and increase taxable income respectively. This effect can be seen on the tax return.

These are important questions. The benefit of strategic RRSP contributions and withdrawals can be $10,000’s or more.

Understanding how RRSP contributions and withdrawals affects your tax return is very important for Canadian retirement planning. We’ll go through the basics of how RRSPs work, as well as a few examples to show how an RRSP contribution or withdrawal shows up on the tax return.

Here is a quick summary of how an RRSP works. When you earn income, you increase your RRSP contribution limit; put another way, you create contribution room in your RRSP. The amount of room you create is 18% of your earned income up to a maximum.

The RRSP contribution room you create in a tax year can be used in the following tax year or any year after that.

When you contribute to an RRSP you’ll use up some of your available contribution room. This RRSP contribution can then be used as a deduction when you file your tax return, or it can be carried forward and deducted in future years. An RRSP deduction lowers your taxable income.

Let’s consider two examples, Clara and Wilbur who both reside in Ontario.

Wilbur is about to retire. He earned $67,000 in employment income in 2021. Wilbur has a sizable RRSP and decided to start making withdrawals before OAS clawbacks begin. He withdraws $10,000 from his RRSP in 2021.

How will Clara and Wilbur’s income change?

When Clara completes her tax return, in the Net Income section on line 20800 is where Clara would enter her $10,000 RRSP contribution. All the details have to be entered in an accompanying RRSP tax form (Schedule 7), which we know Clara filled out diligently! 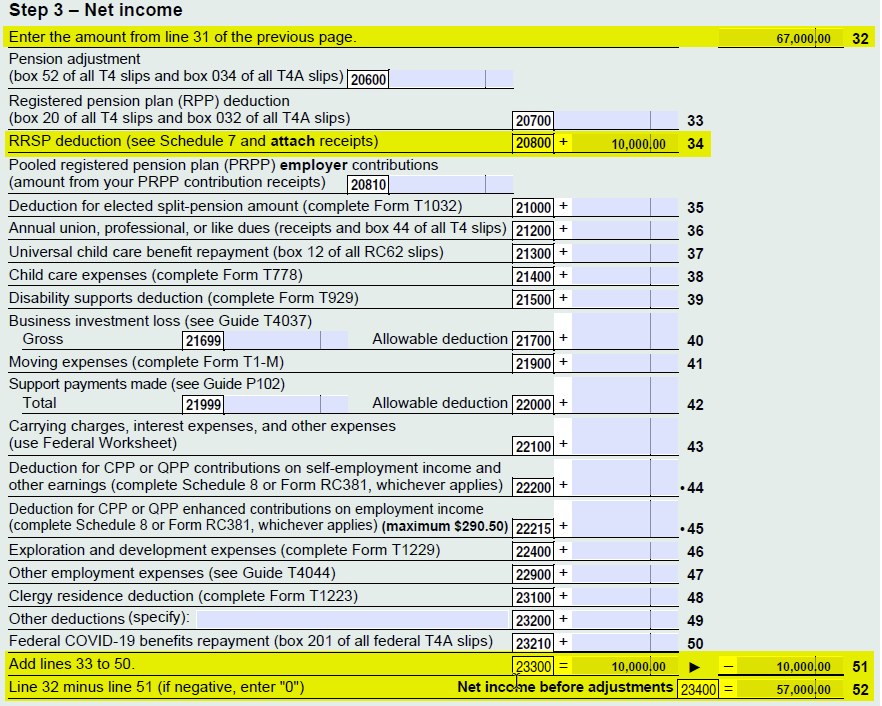 When Wilbur completes his tax return his RRSP withdrawal would show as an increase in Total Income. On line 12900, Wilbur would have to enter $10,000, which will be added to his employment income, resulting in an increase in Net Income to $77,000: 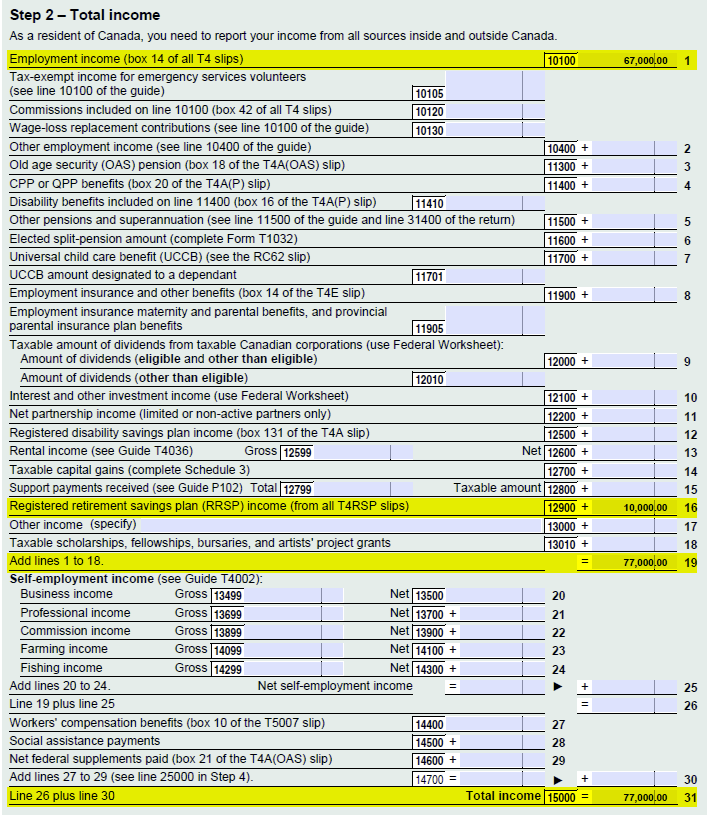 Let’s have a look at what happens to their income tax payable when there is an RRSP contribution and an RRSP withdrawal.

Benefit Of An RRSP Contribution On The Tax Return

In the chart below we’re showing Clara’s marginal tax rate. This is the tax rate on the next dollar of income.

Her tax bill would be reduced by the tax rate of the yellow area. The rate throughout the highlighted area (for a resident of Ontario) would be 29.65%, so income tax owing would be reduced by $2,965 ($10,000 times 29.65%). If income tax was deducted at source, then Clara’s RRSP contribution would create a tax refund. That’s a nice cheque/direct deposit she could expect from the CRA!

Impact Of An RRSP Withdrawal On The Tax Return

In the chart below we’re showing Wilbur’s marginal tax rate. This is the tax rate on the next dollar of income.

However, the story is a little more complicated for Wilbur. When Wilbur made the RRSP withdrawal his financial institution would have withheld a portion of the withdrawal to cover the eventual tax bill. The amount varies with the size of the withdrawal:

(Quebecers aren’t benefiting here from lower rates – residents of Quebec will have an additional 15% withheld by Revenu Québec, regardless of the size of withdrawal.)

In addition to the income tax withheld, the financial institution likely would have charged between $25 to $100+ for this withdrawal. Withdrawals from an RRSP are called a “partial deregistration” and typically incur fees of $25 to $100+.

Understanding how a contribution or a withdrawal from an RRSP impacts your tax return is an important part of creating a financial plan.

Contributing to an RRSP will lower your taxable income and consequently your tax bill. Depending on what your income is, and the size of your contribution, this could even drop you to a lower tax bracket, and perhaps help you qualify for more income-tested benefits like the Canada Child Benefit (CCB) or Guaranteed Income Supplement (GIS).

Withdrawing from an RRSP will increase your taxable income. Whenever you choose to withdraw from an RRSP there are several consequences. The amount withdrawn will be added to your taxable income, a portion of the withdrawal will be withheld by your bank, and you will likely face partial deregistration fees of $25 to $100+. The increase in taxable income will mean higher income tax payable and could mean lower government benefits the following year.