What Is The Guaranteed Income Supplement?

The Guaranteed Income Supplement is a government benefit program focused on low-income retirees. It is based on income and is available to low-income Old Age Security (OAS) recipients. It is a non-taxable benefit meant to protect seniors from low levels of retirement income.

The GIS benefit provides income support to over 2.1 million retirees. It provides support to nearly 1 in 3 seniors in Canada. In a given year the Guaranteed Income Supplement will provide over $13 billion in benefits!

GIS is one of the most generous benefits in Canada and because of this it also comes with some extremely high “clawback” rates. GIS benefits get reduced as household income increases. This reduction is called a “clawback” rate because it “claws back” benefits from higher income households. At a certain income level, depending on the household situation, all benefits will be clawed back.

This “clawback” rate is important because it can reach 50% to 75%. This makes low-income retirement planning an important consideration. Not all income triggers the GIS clawback so it’s important to understand where retirement income is coming from and how GIS will be affected. With the average GIS recipient only receiving 54% of the maximum these clawbacks have a big impact.

In this post we’ll review what the Guaranteed Income Supplement is, how it works, how much you could receive, and how the GIS “clawback” works. We’ll also cover some common types of retirement income and how they can affect GIS benefits.

What Is The Guaranteed Income Supplement?

The Guaranteed Income Supplement (GIS) is a government benefits program focused on low-income retirees. It is one of the most generous government benefits in Canada. It’s meant to protect seniors (those over age 65) from extremely low levels of income in retirement and, with other government programs, helps to creates a “floor” for retirement income.

Guaranteed Income Supplement (GIS) is only available to Old Age Security (OAS) recipients. This means that it cannot start until age 65 and it cannot start unless the individual has a certain number of years in Canada to meet the minimum OAS criteria (10+ before age 65).

GIS payments start the month after you turn 65, provided that you’ve filed taxes on time.

Who Can Receive The Guaranteed Income Supplement?

Eligibility for the Guaranteed Income Supplement is mainly based on three things.

How Much Could You Receive?

The Guaranteed Income Supplement gets reduced as household income increases so how much gets received will depend on other sources of retirement income. The higher the household income, the lower the GIS benefit. A certain point the GIS benefit disappears entirely. If your income is below this threshold then you should receive at least some GIS benefit, but the exact amount will depend on your exact income and the “clawbacks” you face (more on GIS “clawbacks” below).

How Does The Guaranteed Income Supplement Work?

The Guaranteed Income Supplement is meant to support lower-income retirees with retirement spending. It helps provide a “floor” for retirement income and helps keep seniors out of extreme poverty.

To do this, GIS provides a very generous benefit that gets reduced as income increases. A household with a higher income, everything else being equal, will receive less GIS benefit.

To reduce GIS as a retiree’s income increases there is a GIS “clawback”. This clawback acts like a tax rate. The more income a retiree earns, the more the clawback reduces their GIS and the lower their GIS benefit will be. Once a household goes beyond a certain income level they will not receive any GIS benefit because it’s been entirely “clawed back”.

This clawback helps ensure that only those who need GIS will receive it. But it does sometimes work against retirees who may not fully appreciate the rules and how different types of income affect GIS. The average GIS recipient is only receiving 54% of the maximum GIS, the rest is being clawed back based on income.

For example, if additional income is earned in January 2020 (perhaps from some employment income) this is counted in the 2020 tax year and won’t affect GIS until the following July 2021. This can create up to an 18-month lag between income going up and GIS benefits going down. This is important to plan for otherwise a retiree could be in for an unpleasant surprise the following July when their GIS decreases.

What Is The Guaranteed Income Supplement Clawback? How Does It Work?

How does this work?

For example, let’s say a retiree is earning $10,000 per year from CPP and decides to take $1,200 from their RRSP. This RRSP withdrawal is considered taxable income for the year. The extra $1,200 of RRSP income will reduce GIS by 50% or $600/year. This decrease starts the following July, so the monthly payments will remain the same until July of the following year when they’ll be reduced by $50/month (the $600 reduction spread over 12-months). 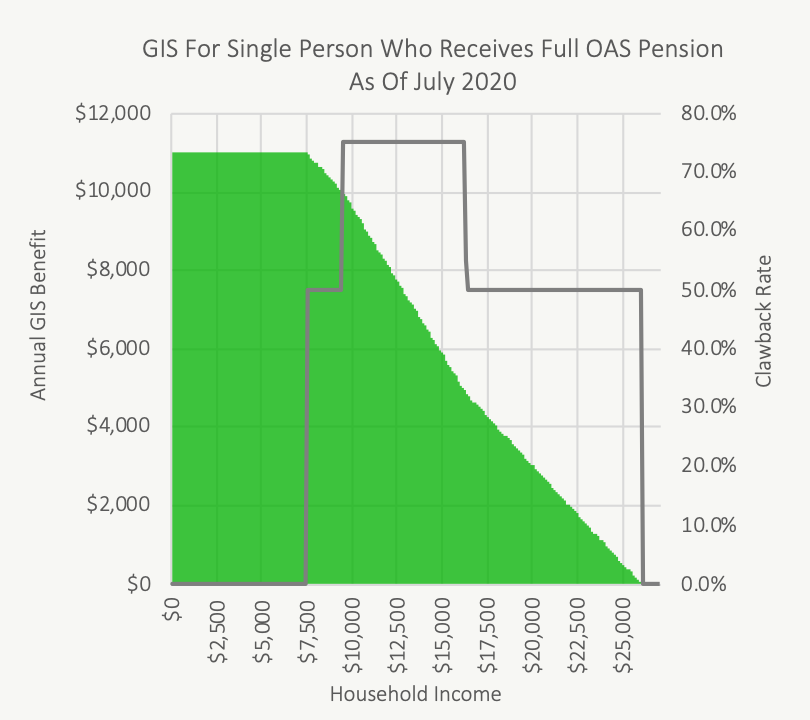 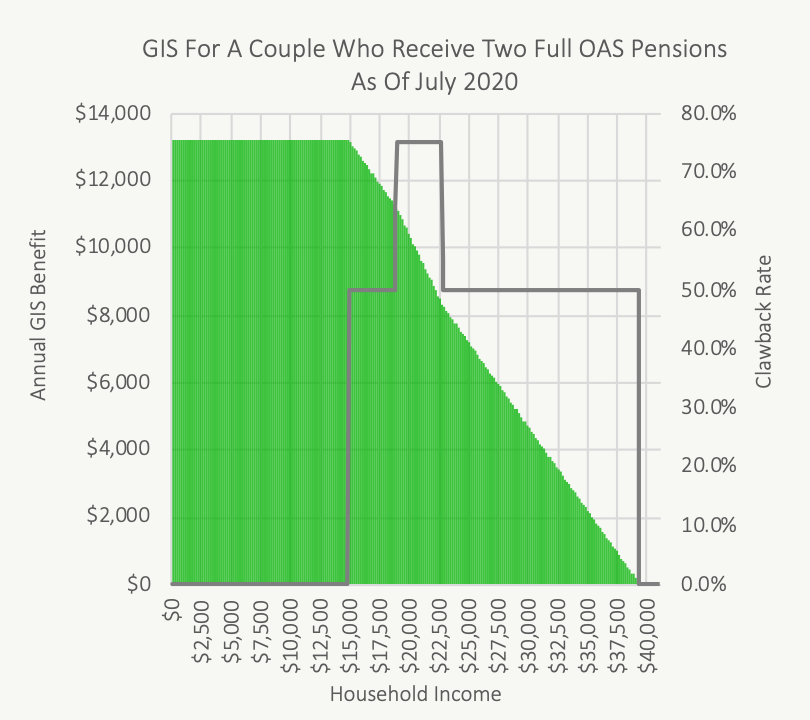 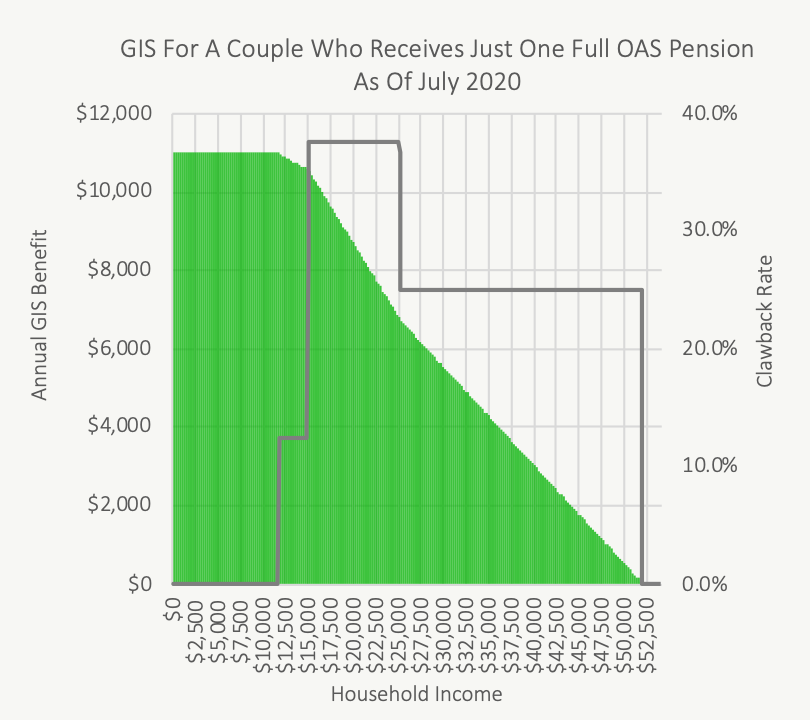 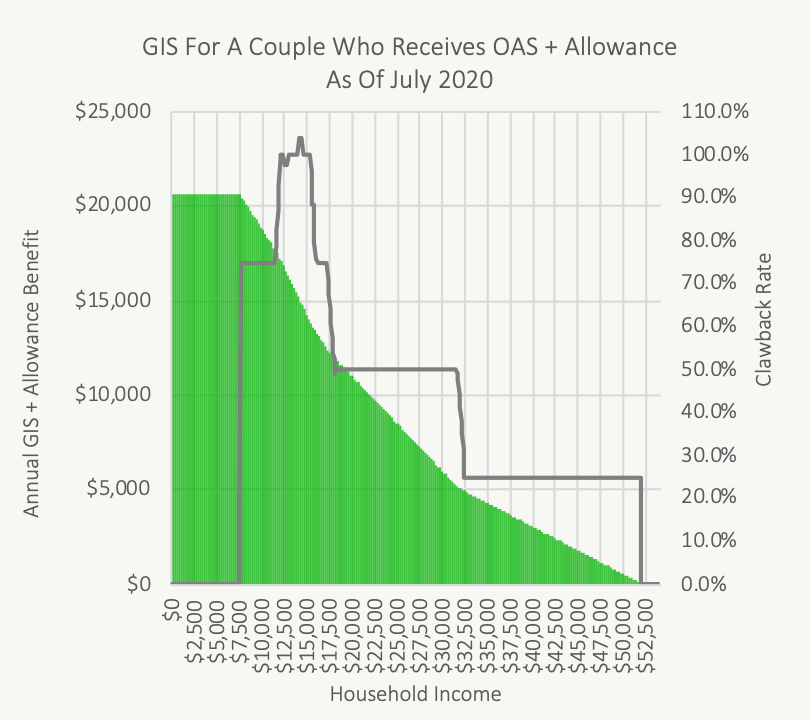 One important thing to note is that certain types of income are either fully excluded from the GIS calculation or are partially excluded. In the next five sections we cover the common types of retirement income and how they affect GIS.

Plus, if OAS is below the maximum there is a special GIS top up that brings OAS to 100%. This can make GIS even more valuable for anyone who has less than 40-years in Canada and therefore does not qualify for full OAS.

For a low-income retiree who expects to receive GIS benefits in the future it can make sense to start CPP benefits as early as possible at age 60, even if still working. This decreases the monthly CPP benefit so less gets clawed back in the future and the extra CPP income from age 60 to 65 can be saved in a TFSA.

Like CPP income, pension income also causes GIS clawbacks. For a low-income retiree a small pension can be clawed back at a rate of 50% to 75%.

In some cases, it can make sense for a low-income retiree to take the commuted value of a pension rather than receive a lifetime pension benefit (which would just get clawed back at a rate of 50% to 75% anyway). This is a unique decision and should be done with the help of a certified financial planner. It would require using unlocking rules to gain access to the commuted value and shift it into a TFSA where it can grow tax free. This only works with pensions of a certain size but it’s an important consideration when clawback rates for GIS are so steep.

Similar to CCP and pension income, withdrawals from a registered account like an RRSP, RRIF or LIF will all cause GIS clawbacks. This can make something like annual RRIF withdrawals very detrimental to a low-income retiree.

Strategically we would like to “meltdown” any registered assets before age 65 to avoid this clawback on RRSP/RRIF/LIF income.

Ideally, we could place these assets into a TFSA prior to GIS starting at age 65 but sometimes that’s not possible and we need to plan a large withdrawal in the future. This large withdrawal should ideally happen on or before age 72 when mandatory RRIF/LIF withdrawals begin.

Guaranteed Income Supplement now has a special provision for employment income. This was new for 2019 tax year and beyond.

This makes it possible for a low-income retiree to augment their retirement income with some part-time work and not lose a large percentage to GIS clawbacks.

The Guaranteed Income Supplement is a valuable benefit for low-income retirees. But the high clawback rate makes low-income retirement planning very important! Even a small change in RRSP withdrawals or employment income can cause large changes to GIS benefits.

Sometimes these changes to GIS benefits cannot be avoided, but many times we can be strategic about how a retiree draws down retirement assets. With some careful planning we can avoid $10,000’s in GIS clawbacks.

Because 1 in 3 retirees receive GIS this is an important consideration for many retirees.  The hefty clawbacks on GIS benefits mean that a bit of planning can potentially increase retirement income and security.