Did You Know Your CPP Estimate Is Probably Wrong?

If you’re preparing for retirement, then you may have looked up your CPP estimate to get an idea of how much you might receive from the Canada Pension Plan (CPP) in the future.

But did you know that your CPP estimate is probably wrong?

If you’re wondering “How much CPP will I get” then its important to know that your CPP estimate is based on some pretty big assumptions. Unless you’re about to start CPP tomorrow, your actual CPP could be much different than your estimate.

But if your future employment income is different than their assumptions this could lead to your actual CPP being much lower or possibly much higher than estimated.

In this blog post we’re going to look at the three major assumptions that impact your CPP estimate and why the amount you receive from CPP could be thousands per year different than what the estimate suggests. We’re also going to look at how you can use a CPP calculator to get a better estimate of your future CPP benefit.

How CPP Is Calculated

First, it’s important to have a rough idea of how CPP is calculated. Your future CPP benefit is directly tied to how much you’ve contributed in the past. The amount you contribute is based on your employment income each year up to the maximum (called the YMPE or Years Maximum Pensionable Earnings)

You need to earn between 35 and 39 full credits to get the maximum from CPP depending on whether you start CPP at age 60 to 65+. 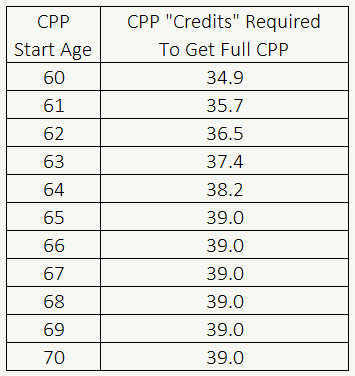 If your employment income is less than the maximum, then you’ll earn a partial credit. Only the top 35 to 39 credits are used to calculate your CPP benefit. So, if you have 40+ partial credits, some of those credits will unfortunately go to waste as they’ll be dropped out of the CPP calculation. You can’t add credits together to make a full credit.

(Note: With CPP enhancement, the actual calculation is a bit more complex than this, but effectively this is how CPP is calculated)

Example Of A CPP Estimate

This is an example of your CPP estimate if you log into MyServiceCanada. But! Unless you’re about to start CPP tomorrow, the CPP at age 60, 65, and 70 is just and estimate based on three big assumptions which we cover below. 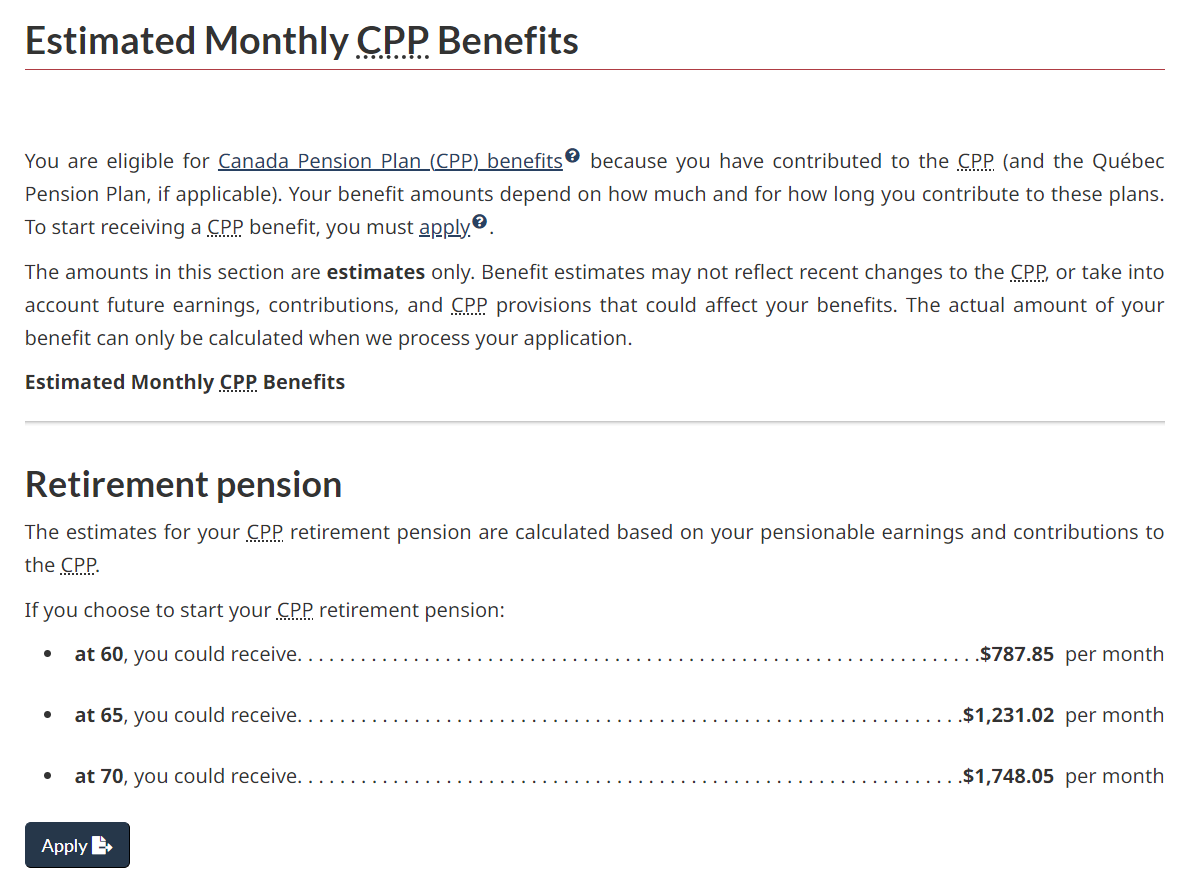 There are two scenarios where this assumption could create a large problem.

First scenario, this creates a problem for those who plan to retire early, in their 40’s or 50’s. Those zero earning years after retirement but before CPP begins will drag down future CPP benefits below the estimate.

Second scenario, this also creates a problem for those who plan to stop working at age 60, or in their early 60’s, but delay CPP benefits until age 65+. Again, those zero earning years between age 60 and 65 will drag down future CPP benefits below the estimate.

How much lower could your CPP be? Well, it depends on a number of factors but each year of CPP is worth approximately 2.5% of the maximum CPP benefit. So, adding five zero earning years could decrease actual CPP benefits by as much as 12.5% (or the impact could be less if there are no major gaps in employment up until retirement, it really depends on the circumstances from one person to the next).

Assumption #2: You Continue Earning Employment Income At Your Average Rate

Another major assumption is that they assume you continue to earn employment income at the same percentage of the Years Maximum Pensionable Earnings (YMPE) until CPP begins. If you earned an average of 80% of the YMPE in the past, then they assume that same percentage will continue in the future. This assumption can help or hurt depending on the situation.

This assumption can hurt future CPP benefits if there is a plan to shift to part-time work for a number of years before starting CPP. These part-time employment years may be below your lifetime average earnings and you may only earn partial credits for those years. If you were earning 100% of YMPE but now only earn 50% of YMPE then this could drag down future CPP benefits.

On the other hand, this assumption could help increase future CPP benefits above the estimate, especially if future earnings are expected to be significantly higher than past earnings. For example, going from part-time work for the last 15-years earning 50% of YMPE, to now working full-time for the next 15-years leading up to retirement earning 100% of YMPE, could mean that the current CPP estimate is much too low as Service Canada assumes you continue earning employment income at a part-time rate until CPP begins.

The final assumption is more of an omission. CPP benefits are currently expanding and those who are still working will benefit from this expansion. This CPP expansion is huge and for younger people their actual CPP could actually be much higher than the current CPP estimate.

At the moment, Service Canada is not including this expansion in the CPP estimate (but this could change in the future).

This means that for higher income earners who are in their 20’s, 30’s, 40’s, and even 50’s, their current CPP estimate may be grossly underestimated versus their future benefit.

Watch The Video For More Details and Examples!

How To Create A Better Estimate For Your Future CPP Benefits

If you’re using the PlanEasy platform to create your financial plan, then there are three important areas that affect your CPP and OAS Estimate.

Lastly, the third area is in Foundation > CPP & OAS Estimate. This section will show your estimated annual CPP benefit depending on what age you choose to start CPP. CPP gets larger when you delay the start date. So, the final important decision is to set the CPP start age (default is age 65).

In example above we have a younger client who will benefit from CPP expansion and so their calculated CPP is much higher than the estimate provided by Service Canada if they choose to work until age 60. This is just one reason why it’s important to calculate your specific CPP benefit based on your unique circumstances.

But if this same client chooses to retire very early, perhaps at age 50, then their calculated CPP is actually much lower than the estimate provided by Service Canada as we see above. This is another reason why it’s important to calculate your specific CPP benefit based on your unique circumstances. For couples especially, just a few changes in the assumptions could mean CPP is $5,000 per year to $10,000 per year different than the estimate! Not a trivial amount!

Start your financial plan on the PlanEasy platform to calculate your future CPP benefit.