One of the most important pieces of a financial plan is income. Without an income it’s simply impossible to achieve any financial goals. Plus, having a higher income makes financial goals significantly easier to achieve.

While expenses often get a lot of focus because they’re entirely within our control, the fact is that without a certain level of household income it becomes much harder to save, invest, and still cover monthly spending.

This is why income, and specifically how income changes, should be an important part of every financial plan. Increasing income over time will make financial goals significantly easier to achieve, it makes debt payments a smaller proportion of net income, and it makes it possible to juggle competing priorities.

But unlike spending, income is unfortunately not completely within our control.

Increasing your annual income can be done a number of different ways. There are “side hustles”, there are second jobs, there is semi-passive income from rental properties etc. etc.

Increasing income is quite common, especially in a persons early 20’s and 30’s. On average income increases 7% per year during this phase. Once we reach our 40’s the pace of increases starts to slow down but those 15-20 years of steady increases can make a big difference.

How do you get salary increases of 7% per year (on average)? It takes a few things to make it easier, negotiating your salary is one, and unfortunately, switching employers often is another.

How impactful is increasing your income? Massive. In our example below, over a person’s working career, it’s equal to about $585,000 or 20,000 hours of extra work.

So, what would you prefer? Negotiating your salary every few years? Or putting in an extra 20,000 hours work (or about 10 years!)

You Have To Ask

The term “salary negotiation” makes it seem much more intense than it actually is. When we think of “negotiation” we think about an FBI negotiator trying to defuse a tense hostage situation. During an actual salary negotiation there is no hostage, no one will live or die, all you have to do is ask.

A salary negotiation isn’t a negotiation at all, it’s a question, just a simple question.

There are also a few important things NOT to do…

(More details on how to ask for a raise and get it.)

Unfortunately, sometimes asking for a raise doesn’t work and one of the best ways to increase income is to move employers often.

It’s sometimes possible to negotiate a large salary increase with a current employer, but it’s much easier to do with a new employer when starting a new role.

The are many reasons why negotiating salary with your current employer is more difficult (whether they’re good reasons is another question).

The current employer might be biased by the current salary they pay you, they may have a cap on the % raise they can provide (which doesn’t apply to new hires), they may have salary “bands” that are difficult to break for existing employees (but somehow easier to break for new hires), they also, for better or worse, have a better idea of your gaps and how you’ll perform in the future (whereas a new hire always is presenting the best version of themselves during the few brief interviews that happen).

Moving jobs is quite common. For the younger age groups (25 to 34) the average number of years in a position is just 2.8. That means younger employees are changing roles quite often. This could be within the organization or outside. But for reasons we mentioned above, the largest income increase typically happens when moving employers.

The Impact of Higher Income

How large an impact can negotiating your salary have on your income over time? Let’s look at an example. In this example we have two “paths” a person can take. Both paths start at age 21 with a salary of $45,000 per year.

The second “path” is a bit more difficult but comes with a much higher increase every 3-years. For 2-years they receive the same 3% increase as the first example but on the 3rd year they either negotiate a larger salary increase or switch employers. This increase every 3-years is worth 10%, a significant boost. At age 40 we assume increases slow down and are only equal to cost of living of 2%. 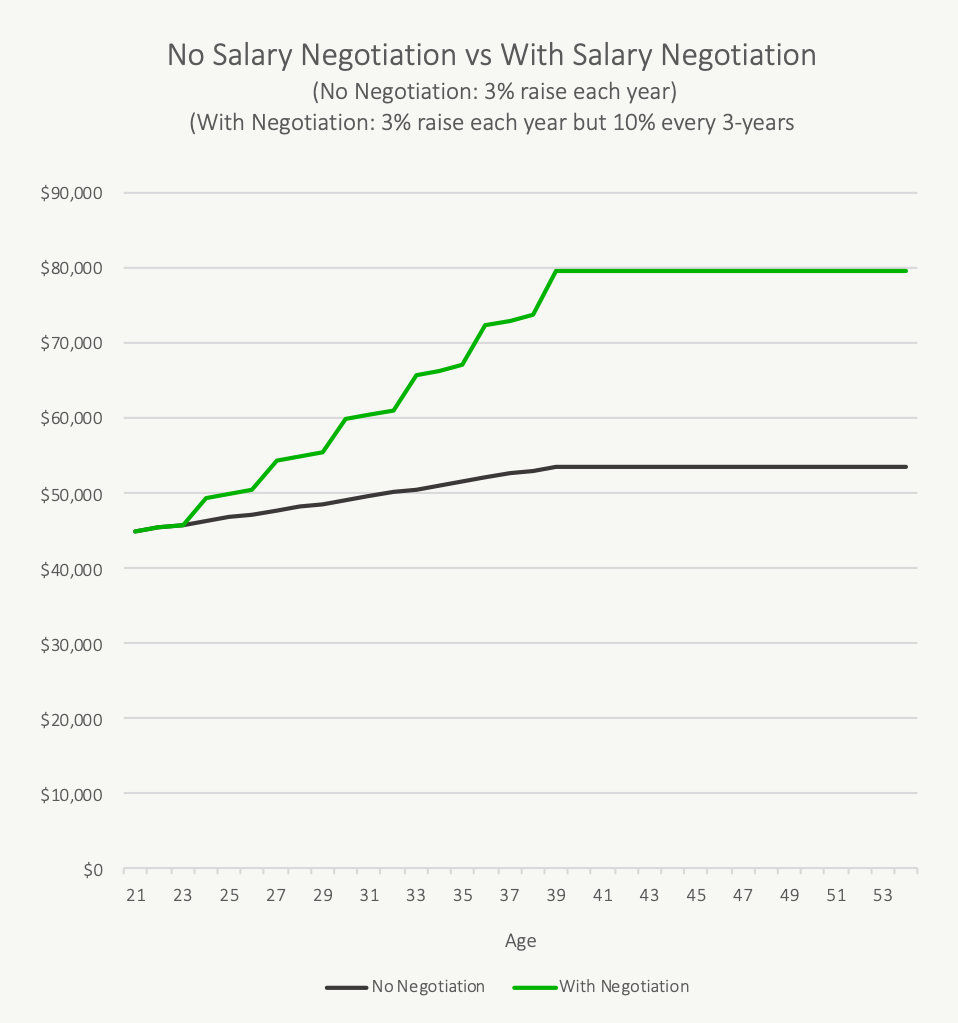 The difference is staggering. Over time, the total difference in salary earned is nearly $585,000 in today’s dollars. Over half a million!

While this example is somewhat extreme, it highlights the amazing impact that salary increases can have over time. Even if the gap was closed by half, it would still require years of extra work to catch up.

It also highlights the limitation of “side hustles” as a way to increase income. It’s a great idea in the short-term but over the long-term a focus on increasing employment income (more money for the same time) is the best way to balance time and money in the future.