The Impact Of Saving vs Spending Over A Lifetime: A Case Study

Spending is one of the most important factors in someone’s personal finances. Even a small amount of extra spending, over a long period of time, can have a very large impact on someone’s financial situation.

Spending is an interesting topic. It’s such an important factor in everyone’s finances and yet everyone spends money differently. We all value things differently, which means we choose to spend extra money on different things. This makes it very hard to figure out what “the right amount of spending” actually is. Spending is very subjective.

What makes it even more complicated is that we all have learned habits and behaviors that impact our spending. These habits are learned over time and can be very difficult to break.

As an example, spending an extra $10 per day seems small. It’s pretty easy to spend $10 per day. This is a coffee every day plus a purchased lunch every other day. This is a nice meal at a restaurant once per week. It’s an extra piece of clothing every week or two. Or it could be a slightly larger home costing an extra $100,000, which comes with extra interest expenses, extra property tax, and extra heating and maintenance costs. It could be driving to work instead of walking, biking or using public transit. Or it could be a combination of these things.

Even though an extra $10/day in spending seems small and is easy to do if you’re not paying attention, over time it has a huge impact on a person’s financial life.

This post will follow two people through their financial lives, with one person spending $10/day more than the other. It may seem small, after all it’s only $10, but that adds up $3,650 per year, or $36,500 every 10-years, and that doesn’t even account for compounding.

For our example we’ll use two friends from high school, Katie and Kyle, they’re both 18 years old and about to enter university. They’re both entering an engineering program and have very little saved for university. They’ll use student loans plus summer jobs earning $12,000 per summer to help pay for their education.

Most important however is that Kyle is the more spendthrift friend out of the two, spending an extra $10/day than Katie. This habit of spending vs saving will continue throughout their lives with Kyle always spending $10 more per day and Katie saving that $10.

Let’s follow Kyle and Katie through a few periods of their life. We’ll see how a seemingly insignificant $10/day can cause their financial lives to diverge dramatically over time.

Saving vs Spending: University and Mid-20’s

During university both Kyle and Katie have similar summer jobs earning approximately $12,000 per year in today’s dollars. They’re spending more on tuition, housing, transportation etc so the shortfall must be funded through student loans.

By the end of their 4-year program Katie has taken on a little over $50,000 in student loans. But Kyle, by spending just an extra $10 per day has amassed an extra $15,000 in debt. Already their financial lives have begun to diverge.

Luckily both Kyle and Katie land good engineering jobs directly out of university. They go to work for the same multinational engineering firm earning a similar entry level salary. Their compensation increases quickly in their mid to late 20’s through promotions and merit increases.

But the difference in student debt means that Kyle has 2+ years of debt payments versus Katie. Because they both have debt payments of $750/month this means Kyle makes an extra $20,000+ in debt payments.

Katie and Kyle are fortunate that their employer provides a defined contribution pension with a match of 50%. They put in 6% of their salary and their employer matches 3%. They’re smart to take advantage of this and it represents a large part of their increasing net worth.

Yet, with Katie’s habit of saving vs spending we can see that by the end of their 20’s she’s been able to accumulate a sizable amount of savings and investments inside her TFSA. Kyle, due to his higher spending and increased debt payments isn’t able to save quite as much.

Their financial lives become further divided, despite the only difference being $10/day in spending vs saving. 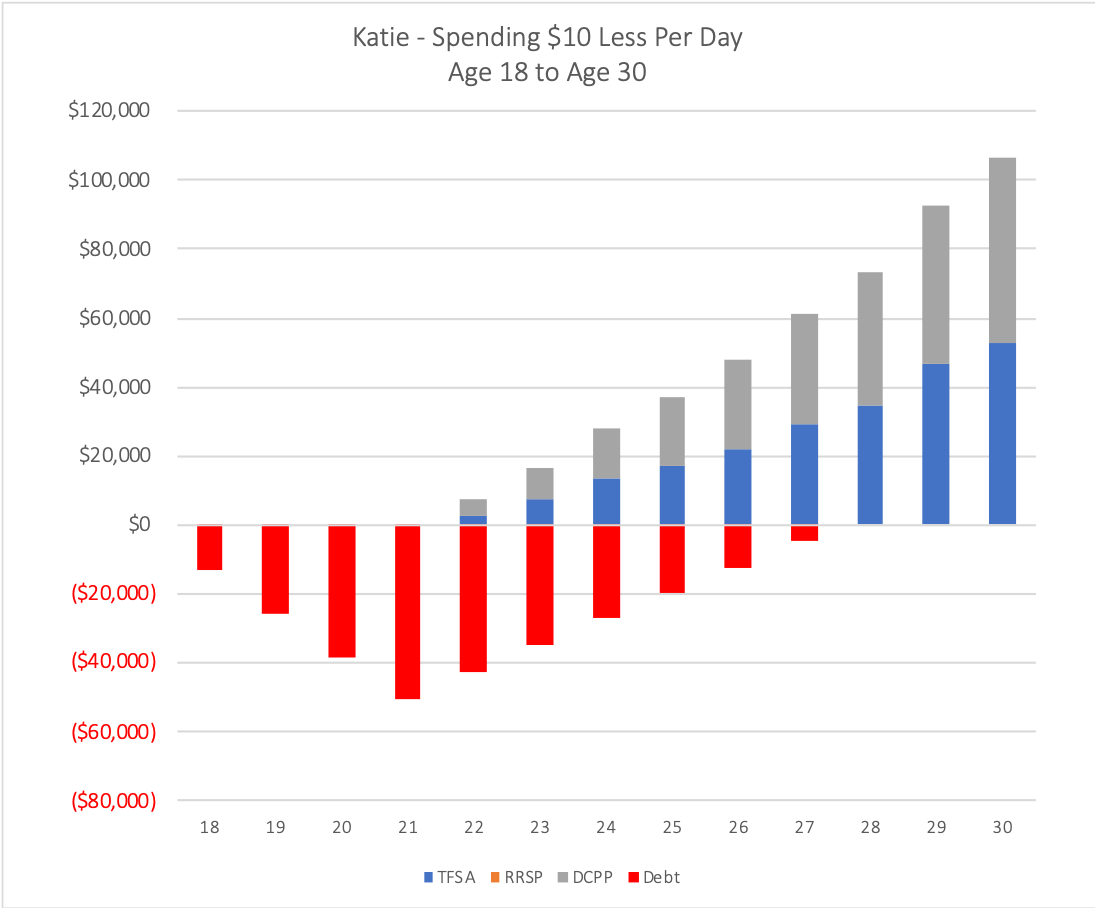 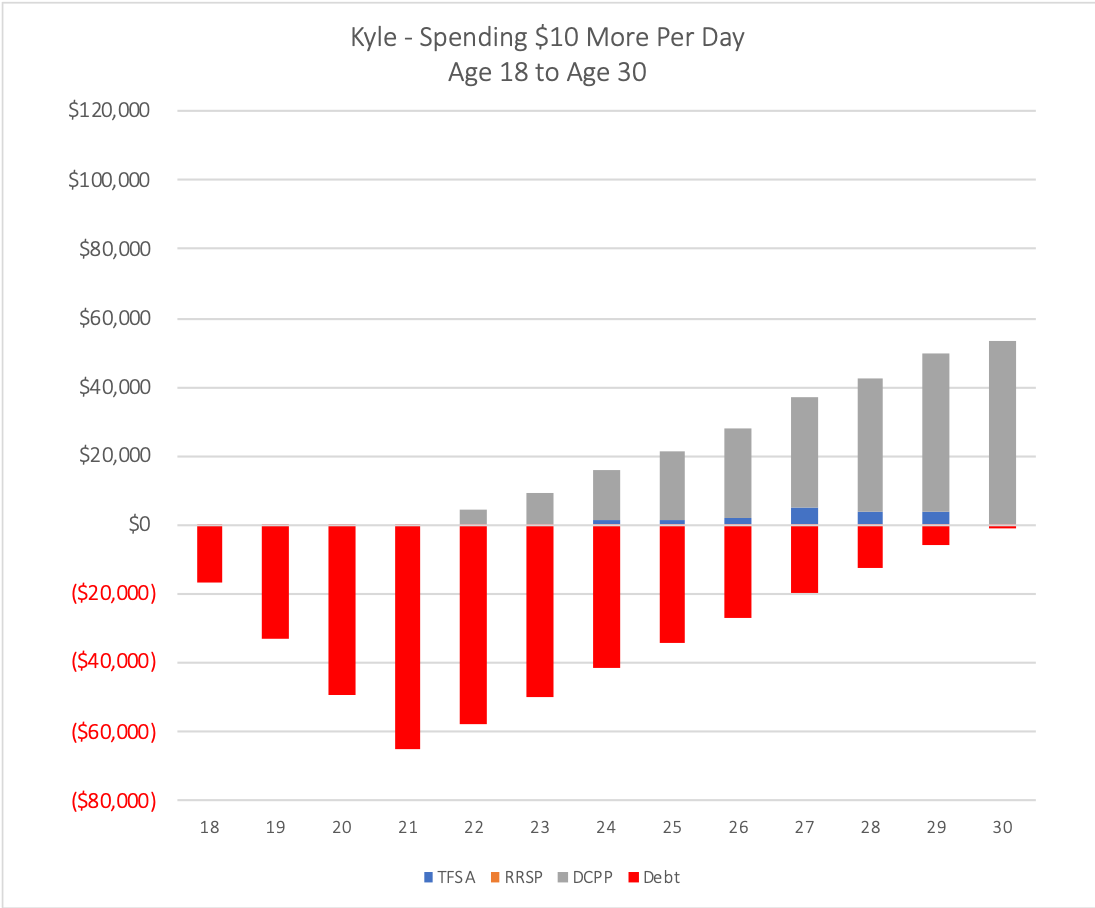 Spending vs Saving: Career Growth in 30’s and Early 40’s

Now in their 30’s, Kyle and Katie find themselves in a higher tax bracket. Promotions and merit increase aren’t happening quite as quickly but with their higher salary they now start to prioritize RRSP contributions vs TFSA contributions.

With higher saving vs spending, Katie puts her extra $10/day into an RRSP for retirement. Kyle does the same but at a slower rate.

During this time, in conjunction with their increasing income, the pair also increases their lifestyle spending. Rather than having roommates they now rent a condo of their own. This plus other lifestyle spending starts to eat into their income. Because of his extra spending Kyle even finds himself putting expenses on credit card once or twice.

Katie’s saving vs spending in her 20’s now compounds with added savings in her 30’s and 40’s. The gap between Kyle and Katie continues to widen. Luckily, their defined contribution pension means that Kyle is still accumulating a sizable net worth through forced savings each year. 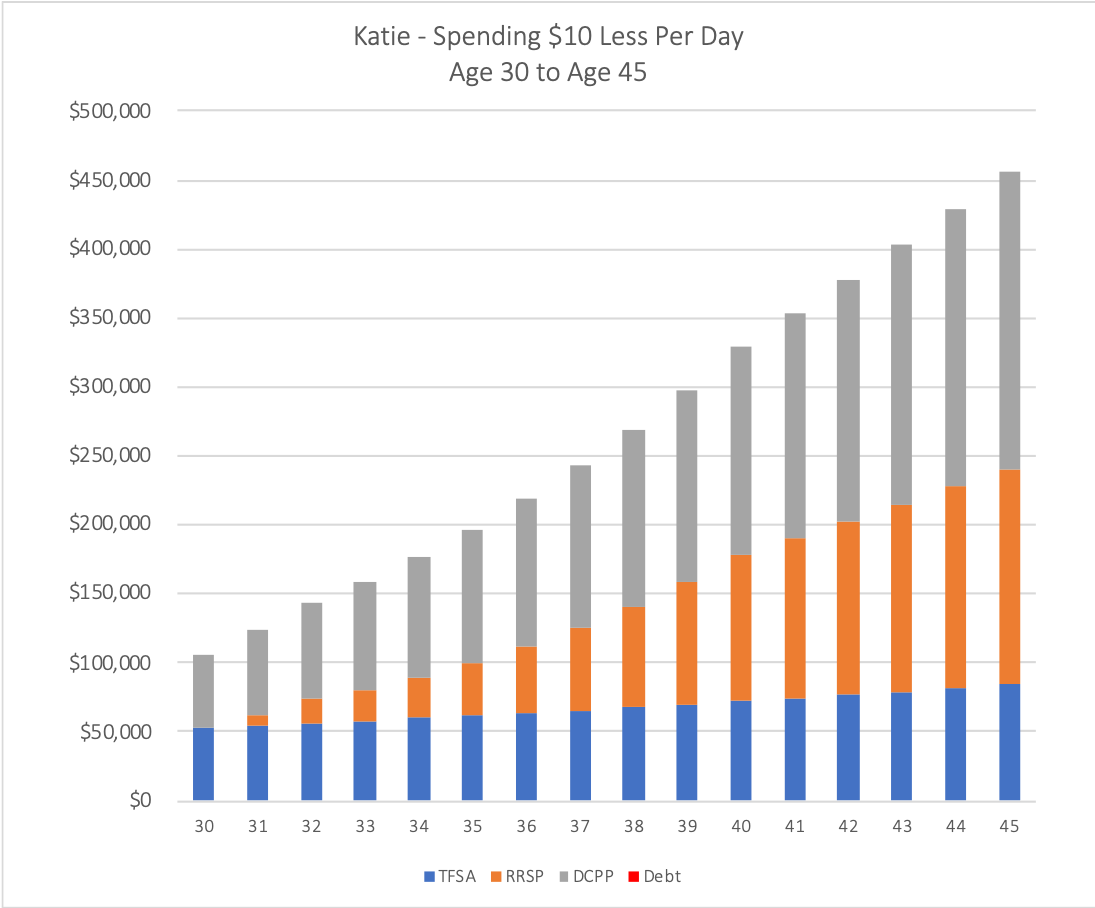 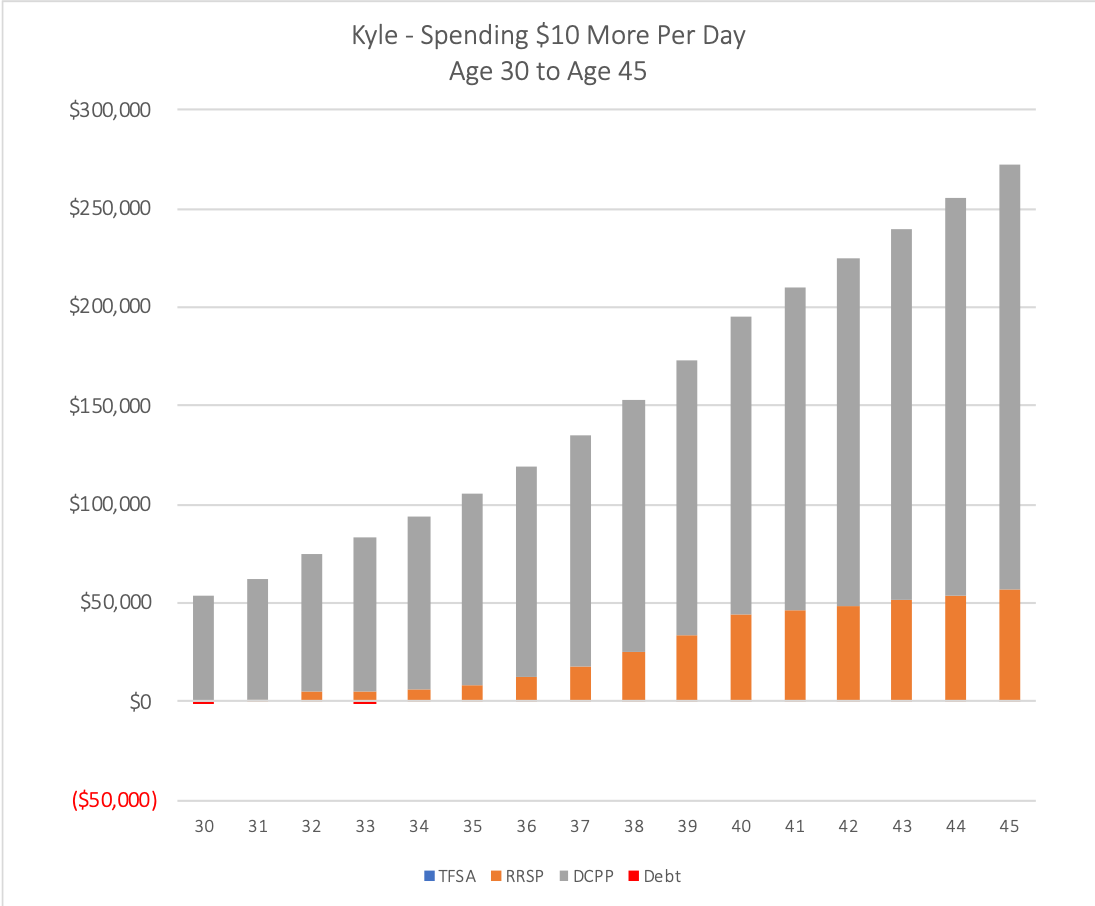 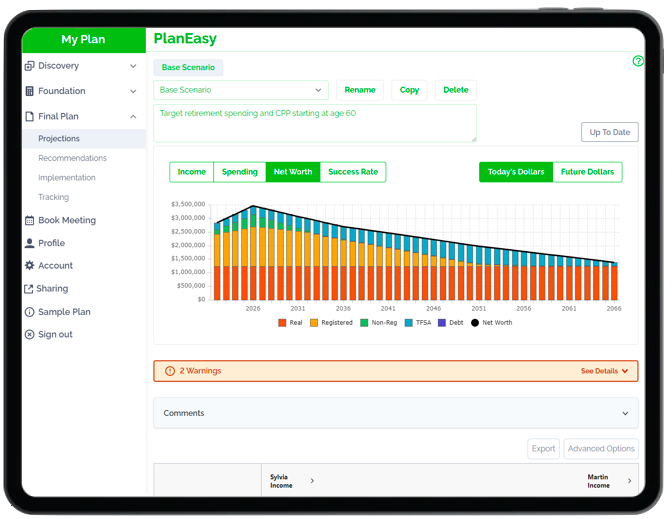 During their pre-retirement phase both Kyle and Katie continue to increase their net worth. Contributions to their defined contribution pension and RRSPs continue to grow.

A difference of $10 per day seems so small, but over time it has meant that Katie has added an extra $171,550 to her investment portfolio. With compounding this has become an extra $463,000 of investment assets for Katie as they start retirement. 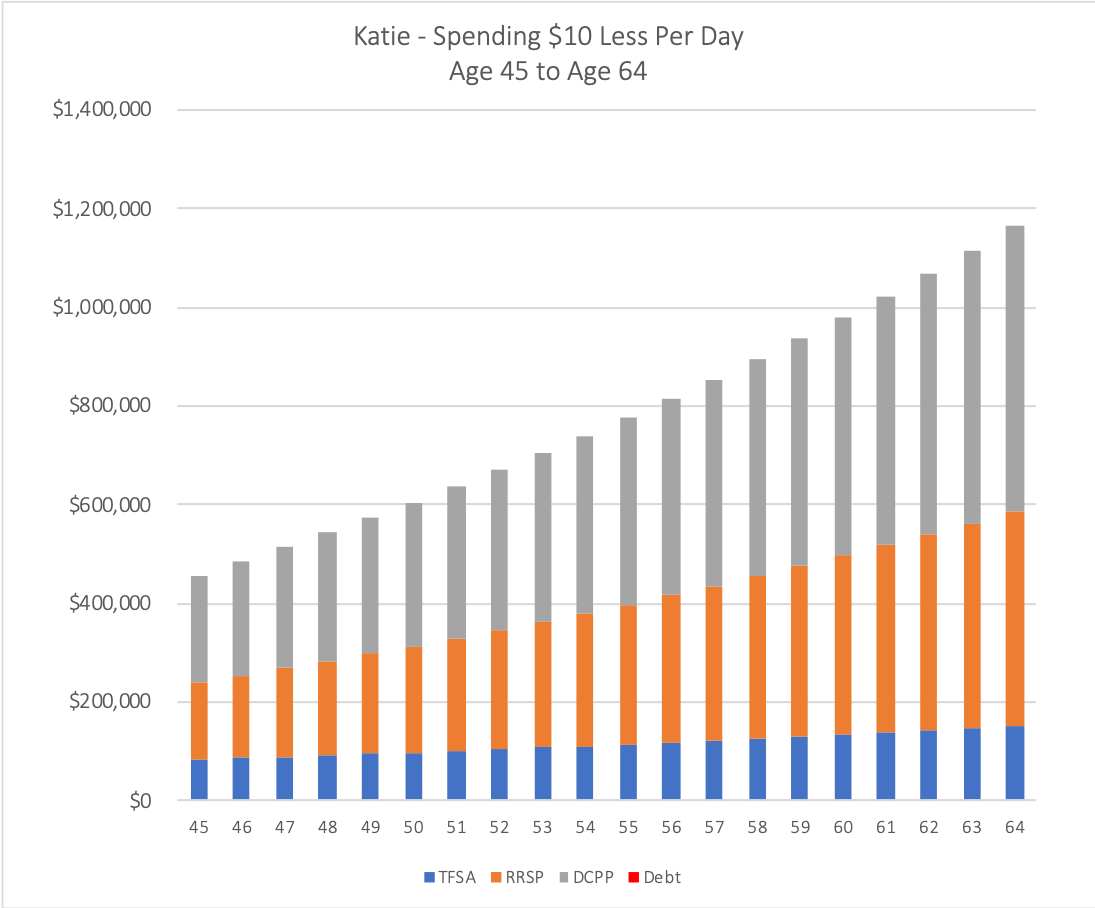 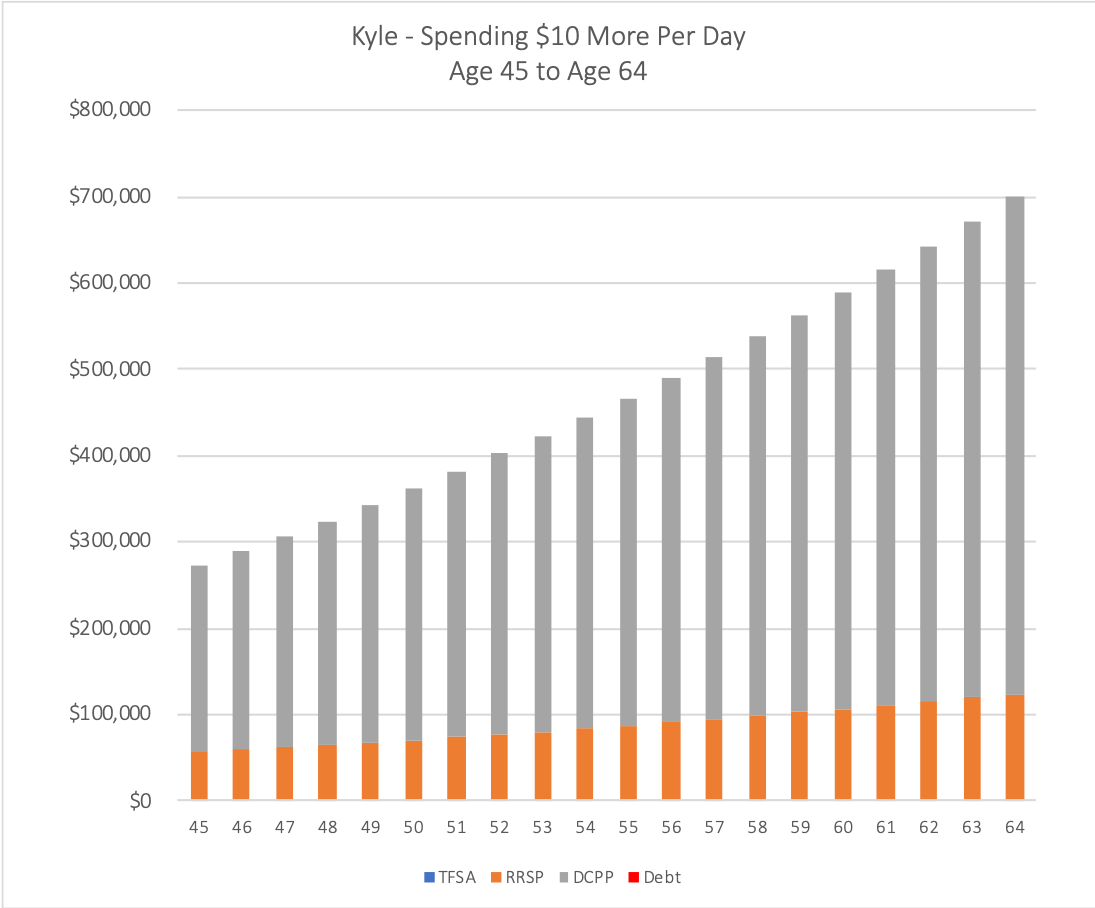 During retirement Kyle’s extra spending becomes even more impactful. Spending an extra $10/day will mean a higher draw on a smaller base of investment assets.

Katie is spending $54,000 per year in retirement while Kyle is spending $57,650 (both values in today’s dollars). While this isn’t a large gap, their retirement assets are significantly different. With a smaller base of retirement assets, Kyle finds that his spending cannot be supported by his savings. What’s more is that the extra $3,650 in spending per year is post-tax and Kyle actually needs to draw an extra $5,596 from his registered assets to support this extra spending ($3,650 for spending and $1,946 in marginal tax).

If we project this his spending forward, we find that Kyle starts to run out of money in just 10-years by age 75. Even with maximum withdrawals from his DCPP (now a LIF) he needs to draw a significant amount from his RRSP to support his spending of $57,650 per year.

Without making a change to his spending in retirement, Kyle will run completely out of retirement assets by age 83 (and this doesn’t even account for sequence of returns risk).

On the other hand, Katie’s retirement projection looks great. Not only can she support her spending all the way into her late 90’s but she even has room in her plan to absorb unexpected expenses for extra travel or perhaps health care late in retirement. Katie can also be more tax efficient with her assets in retirement, slowly shifting her RRSP into her TFSA over time. 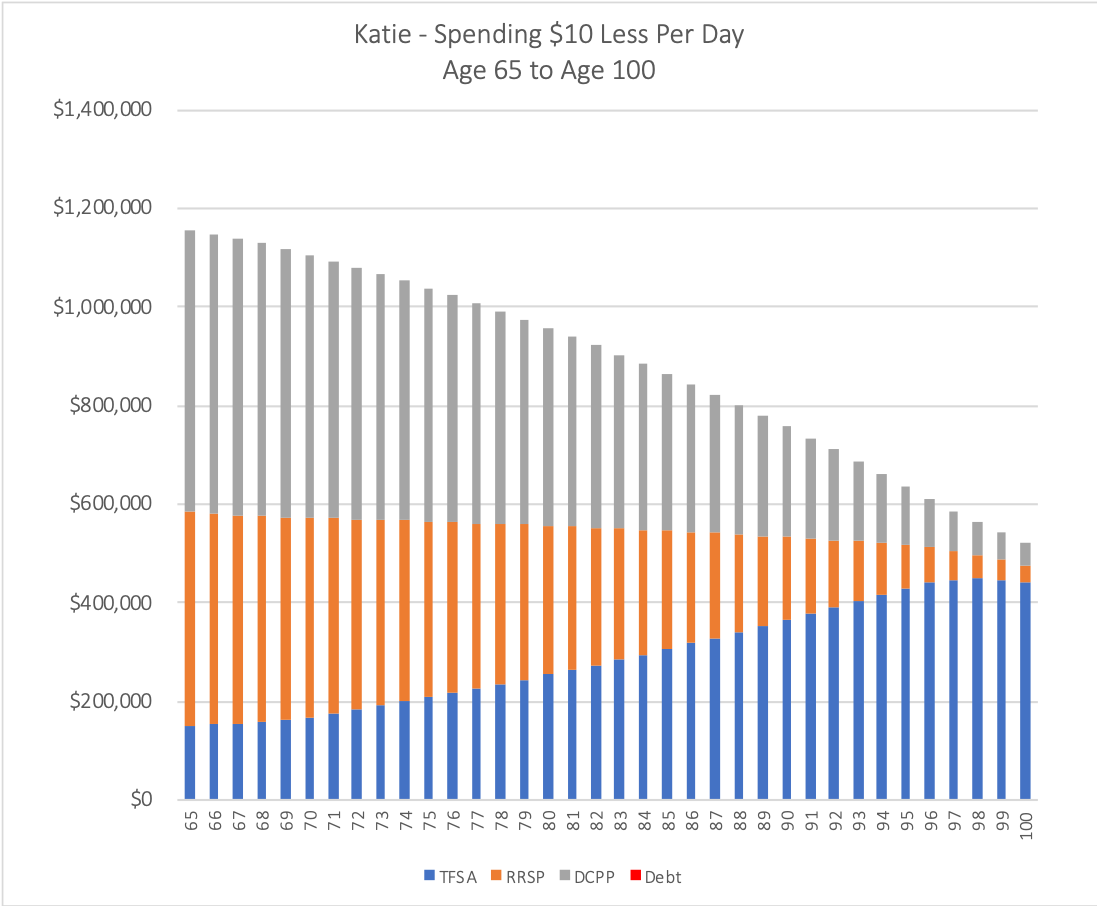 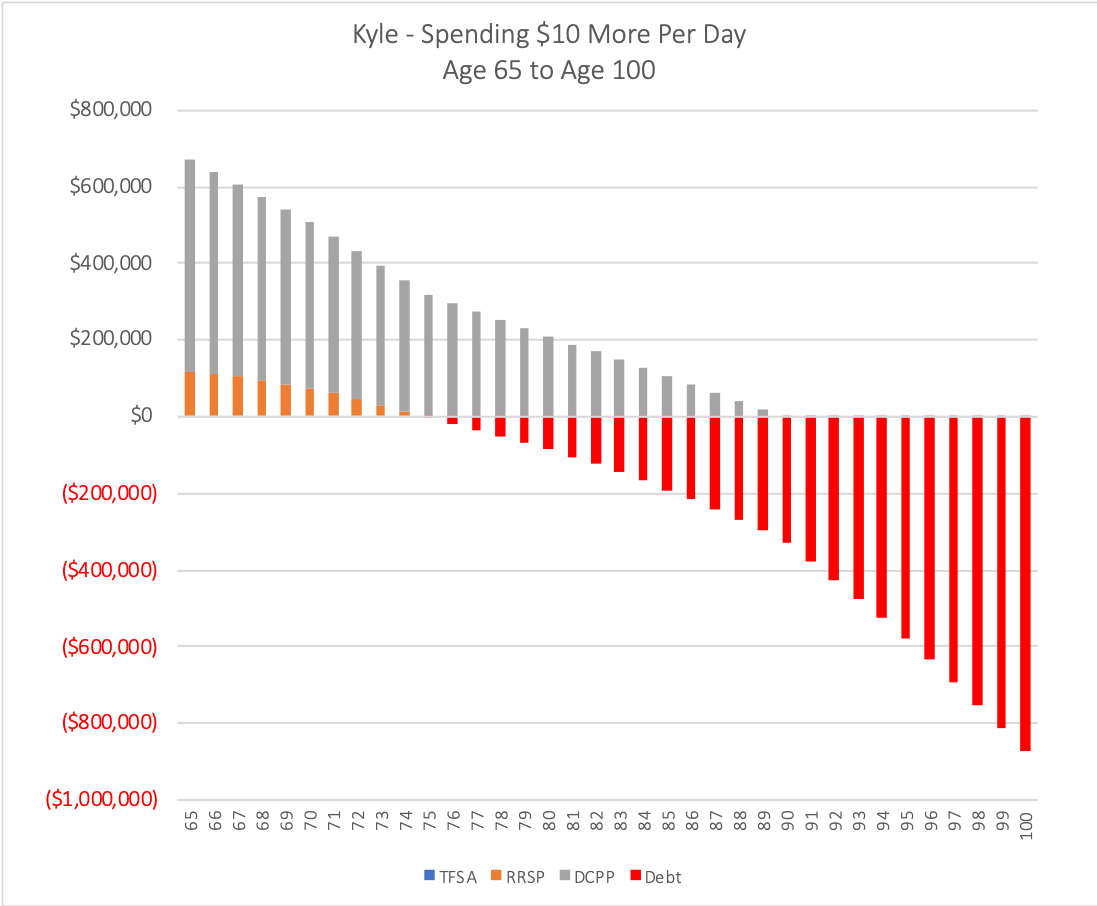 The Habit Of Saving vs Spending

Katie’s habit of saving vs spending has had a significant impact on her financial life. A seemingly insignificant $10/day has added up over time to create a dramatic difference in her net worth versus her friend Kyle.

Over a lifetime the difference is nearly $1,400,000 in today’s dollars. Helped by compounding on investments, the gap starts small but quickly becomes enormous.

This difference in spending vs saving not only affects their finances but also their wellbeing. Kyle doesn’t have the same “buffer” that Katie enjoys in her TFSA. Kyle is forced to rely on debt more than Katie. He has to use student loans and credit cards to support his extra spending. Because of the extra spending Kyle doesn’t enjoy the same level of financial comfort that Katie enjoys.

Katie also has more peace of mind knowing that she can withstand a shock to her financial plan without being too concerned with the long-term implications. Because of her extra savings and lower spending, she can take time off work, endure a layoff, switch careers, or take a sabbatical etc.

With the projections it’s easy to see the financial impact that $10/day has on their financial lives, but the psychological benefit of saving vs spending provide a lot of value as well.

Saving versus spending, even a small amount, can have such a large impact over time that we should all strive to better understand where our money is going. Because even something small like $10/day can mean the difference between financial stress and financial peace of mind. 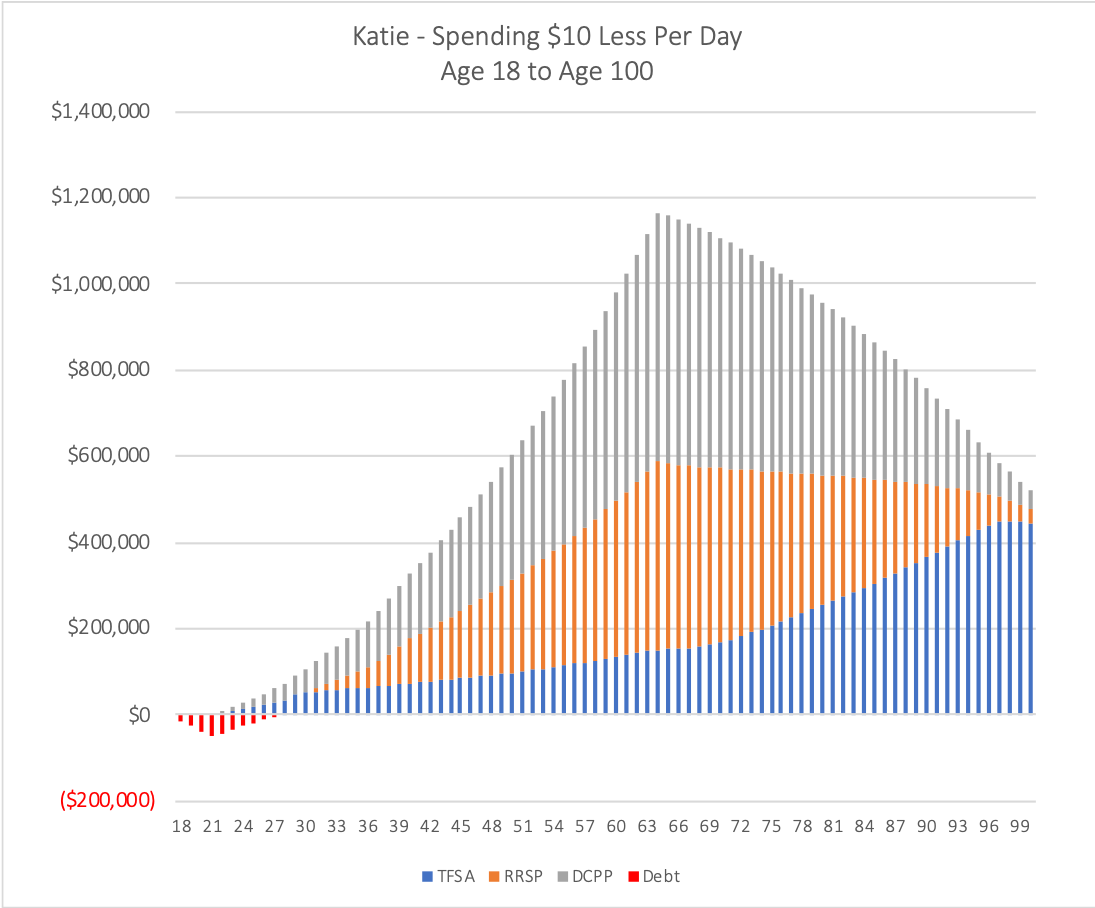 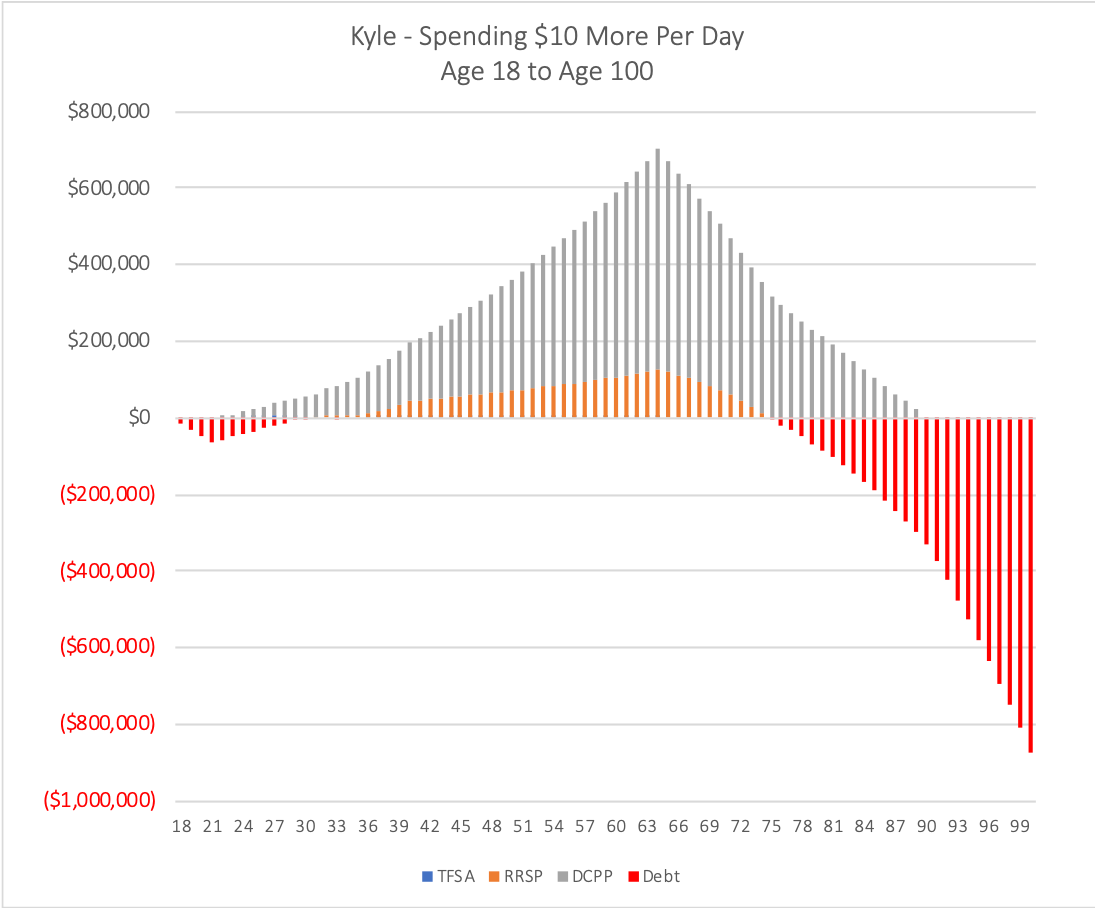