Creating An Emergency Budget For Your Retirement

Having an emergency budget is not a new concept, it’s something we’ve written about before, but for retirees it’s particularly important.

An emergency budget is a slightly reduced budget that can be executed in times of uncertainty.

For retirees, “uncertainty” is at its highest during a recession, when investment assets have drastically reduced in price. But “uncertainty” could also be high during a long periods of below average investment returns, stagnate economic growth, or high inflation rates.

Emergency budgets are important for retirees that rely on investment assets to fund part of their retirement spending.

Often, retirement projections are done using an average rate of return. This provides a nice pretty graph but doesn’t accurately represent the range of investment returns retirees may experience in retirement.

One important way to counteract the effect of sequence of returns risk is to reduce the draw on investment assets during periods when stock market returns are low and/or negative for a period of time.

Reducing the draw on investments, even by a small amount, helps increase the success rate of a retirement plan.

There are a few important factors when creating an emergency budget.

Know Where Your Money Is Going

It’s hard to create a good emergency budget without first understanding where money is currently going.

An emergency budget should aim to reduce spending in those things that provide the least value. These are the things that can be reduced easily and without much impact.

This can be difficult to do when it’s not clear where money is currently going. Large amounts of miscellaneous spending can make this exercise very difficult. It’s hard to weigh the value of different types of spending when there is a large amount of monthly spending lumped in a miscellaneous category.

Before entering retirement its a good idea to track spending for a period of 6-12 months to get a better sense of where your money is going. Tracking spending is easy to do, we have a free template that you can use to automate your spend tracking, or you can easily build your own.

We when we look at core spending want to understand how much you need to spend to feel comfortable in retirement. This isn’t necessarily a bare bones budget, it might even include small amounts of spending on restaurants, clothing, vacations etc.

After we identify core spending, then discretionary spending is everything else.

Knowing the difference between your core spending and your discretionary spending is an important step in building an emergency budget for retirement.

Ideally an emergency budget should be between 10% and 30% below your regular budget. The more room you have to decrease spending in an emergency, the better.

Retirees with a tight retirement budget have more risk in their retirement plan because they have less room to decrease spending in retirement.

Two retiree couples, each with $70,000 retirement budgets, but who have different levels of discretionary spending, will have vastly different risks of running out of money in retirement.

The retirees who have room in their budget to reduce spending by 30%+ will have a much less risky retirement plan.

Example of An Emergency Retirement Budget 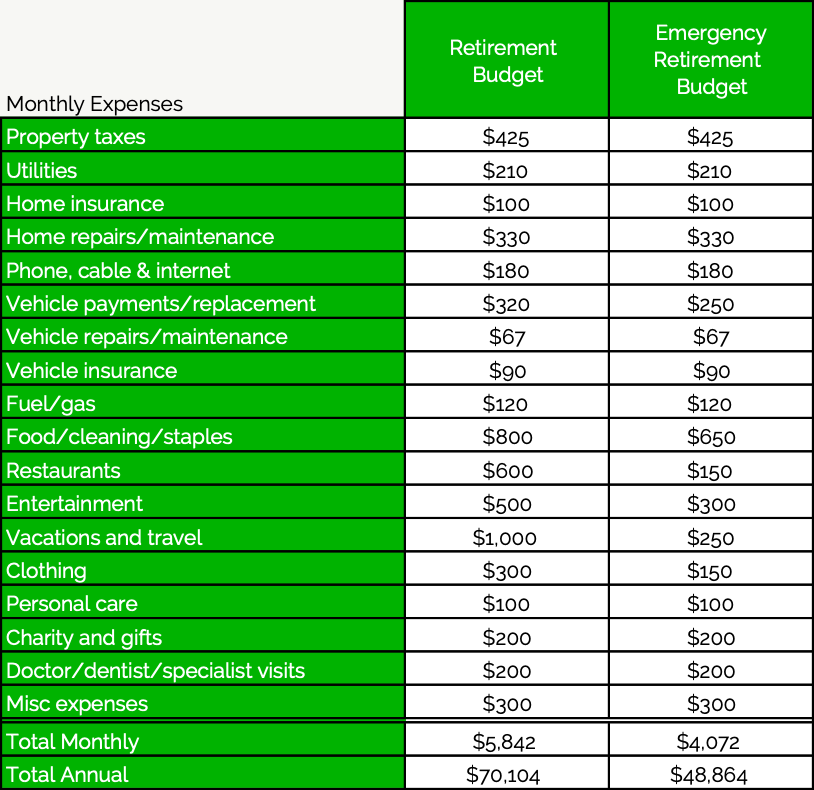 Putting an emergency budget into action will vary from person to person. Investment returns outside of historical results or outside of the assumptions within their plan should trigger a reduction in spending for a retiree.

Hopefully a retiree will never have to put their emergency budget into action, but having a plan in place can provide an incredible amount of peace of mind, it can give a retiree some degree of “control” during periods of uncertainty.

Many retirees have retirement plans that would be successful even in the most challenging historical scenarios. Their plan might be successful even during the Great Depression, or even during the high inflation of the 1970’s. But these periods come with a high degree of uncertainty. In these situations, a retiree might see their investment portfolio drop by 50%+ when factoring in drawdown for retirement spending. For a new retiree, this can be very disconcerting when it happens early in retirement.

In these situations, it can be extremely helpful to have a pre-defined emergency budget already made. This emergency budget gives the retiree a certain amount of control over the situation and lets them reduce the draw on their retirement assets.

During periods of high uncertainty this can provide a lot of peace of mind and that’s why every retiree should have an emergency budget ready to go.