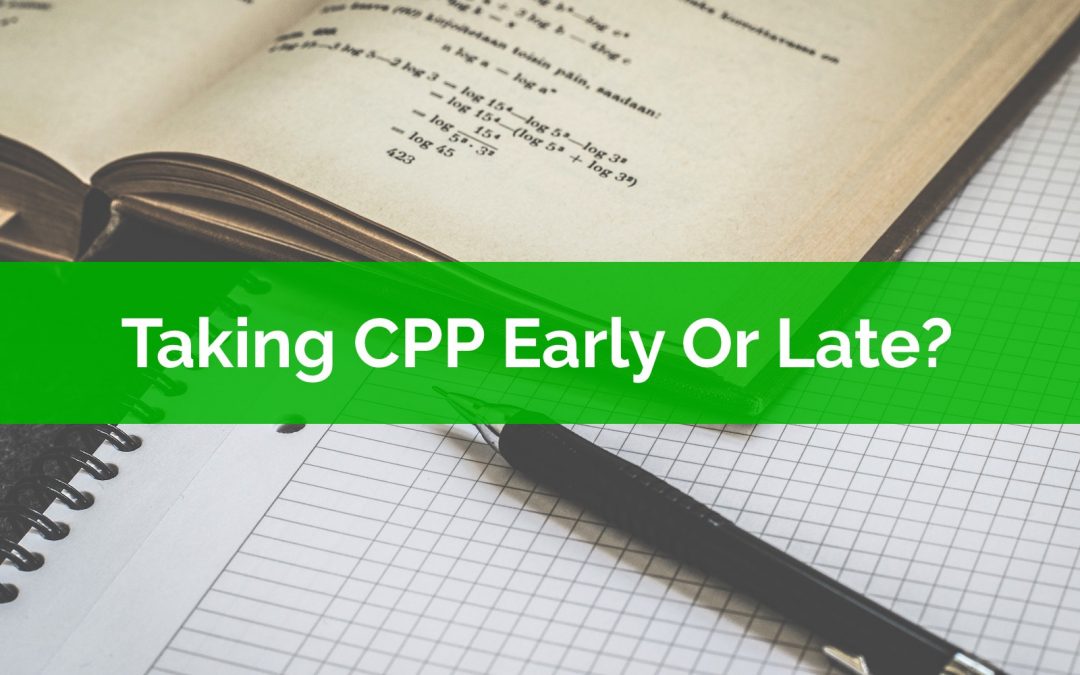 Taking CPP Early Or Late? How Long Until Breakeven?

When to start taking CPP is just one of the many difficult decisions soon-to-be retirees face as they approach their retirement date.

It’s a big decision, and like many financial decisions there are many aspects to consider when deciding when to take CPP.

Taking CPP late can provide a financial benefit if you plan to live past a certain age. This is a number and it’s easier to evaluate but it’s based on longevity, which is a big unknown.

Taking CPP late also has non-financial considerations. There are “soft benefits” to delaying CPP. Depending on how much you value these soft benefits they can be worth quite a bit as well.

Even when two people have the exact same financial situation, they may choose different times to start CPP simply due to these longevity questions and soft benefits.

When deciding to take CPP or delay its first important to get basic understanding of how CPP works and how CPP payments change each year as you delay. 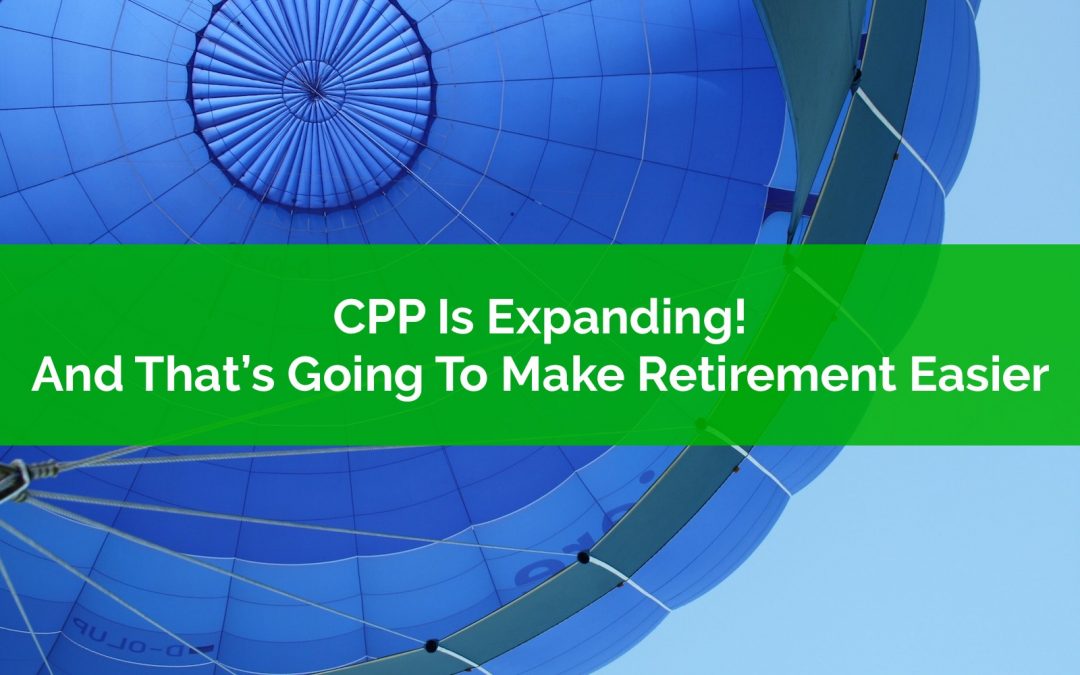 The Canada Pension Plan is expanding this year and that’s going to make retirement easier in the future. This expansion is part of a multi year effort to increase the size of CPP payouts in the future. The increased CPP benefits will make retirement easier for many people. It will mean less personal savings are needed for retirement and if you continue to save at the same rate as today you might actually be saving too much!

CPP is one of the best pension funds in the world. Actuaries have stated that CPP is solvent for 75+ years. That means anyone contributing to CPP now has very little to worry about when it comes to future CPP payments.

Despite Canada Pension Plan being one of the best pension in the world I still come across comments from people who are negative about CPP and OAS. They prefer not to count these retirement pensions in their financial plans. Instead they prefer to save more for retirement.

While I understand the desire to be prudent, this line of thinking makes things more difficult than they need to be. Retirement pensions like CPP and OAS provide an enormous amount of retirement income and ignoring them just means you have to save more.

Ignoring CPP and OAS is like running in a windstorm with a parachute tied to your back!

Why add that extra resistance when it’s already hard enough to save for retirement?!?

The good news for many people is that CPP enhancement will now fund even more of their retirement. Future CPP payments will make up an even higher % of retirement income. Before CPP reform the original goal for CPP was to cover 25% of earnings (up to the max) but with CPP enhancement the goal is to increase this to cover 33% of earnings (with a higher max too!). The result is that CPP payments will be up to 50% higher in the future!

This expansion will happen in two phases and the impact on your financial future will depend on how much you’re earning today and how long you’ll contribute under the new rules.

The new Canada Pension Plan expansion won’t impact everyone equally, some people will gain more than others. Let’s look at the two phases of the expansion and how it will impact us.

The “4% Rule” is a common rule in personal finance. It’s a basic rule of thumb that suggests you can withdraw 4% from a well diversified portfolio and have a reasonably high chance of having money left over in 30-years.

Like any personal finance rule, it’s a bit of an oversimplification of a rule that contains many nuances. This rule is based on a famous study called “The Trinity Study”. That study was built on top of the work of Bill Bengen who used historical stock/bond/inflation rates to determine that a retiree can withdraw 4% of their initial portfolio value, adjusted for inflation each year, and have a reasonably high chance of success.

This is an amazing piece of work and has enabled many individuals to formulate their own retirement plans. But for Canadians it might be too low & too pessimistic.

When using the 4% rule it’s important to remember that “success” in the Trinity Study and in Bengen’s analysis means that there is at least $1 left after 30-years. It does not mean that investment principal will be left untouched. It’s very possible that a retiree could end up with just $1 in their account after 30-years and that would be considered success.

The nice thing about the 4% rule is that it’s pretty easy to find your target “retirement number”. All you have to do is estimate your annual retirement spending (including tax!) and multiplying by 25. If I wanted to retire with $50k/year before tax, according to the 4 percent rule, I would need $1,250,000 (25x $50,000/year)

The issue with the 4% withdrawal rule is that for Canadians it’s too low, it’s too pessimistic, and it leads people to forget about other types of retirement income and perhaps save too much. If you’re retiring in your 50’s to early 60’s then you could start withdrawing at a higher rate and still be successful.

(Disclaimer: Everyone’s situation is different. What works for one retiree may not work for another. Make sure to review your retirement plans with an advice-only financial planner to ensure your plan is successful)

Retirees in their 50’s or early 60’s will be eligible for two large government benefits just a few years after retirement. CPP and OAS can easily provide 25%+ of a retirees annual spending. Ignoring these benefits will mean you might save too much! Aiming for a portfolio that is 25x your annual spending is overkill because it doesn’t take into account these large government benefits.

For many retirees in their 50’s and early 60’s they can withdrawal MORE than 4% from their portfolio at the beginning of retirement. This is because a few years down the road they’ll be eligible for CPP and OAS. Once these benefits kick in their withdrawal rate will be much, much lower.

But, the earlier you retire the closer to the 4 percent withdrawal rate you need to be. Retiring early means you need to have closer to 25x your annual spending to bridge the gap between early retirement and government benefits. Bridging a 5-year gap between age 55, when retirement starts, and age 60, the earliest CPP can begin, is much different than retiring at 45 and waiting 15+ years for CPP.

Not only does retiring early create a larger gap between your retirement date and CPP/OAS but there are other risks too. One of the biggest risks is a change to OAS.

OAS is funded through government revenue. This means it’s not guaranteed the same way CPP is guaranteed. In fact, we’ve already seen OAS change twice in the last decade. OAS briefly went from age 65 to age 67 and then back again. This didn’t affect people who were already 55 but for those 55 and under they saw their earliest OAS date pushed later and later.

Still, for anyone in their early 50’s to early 60’s it’s reasonable to assume CPP and OAS will be available in its current form (but nothing is 100% guaranteed!) 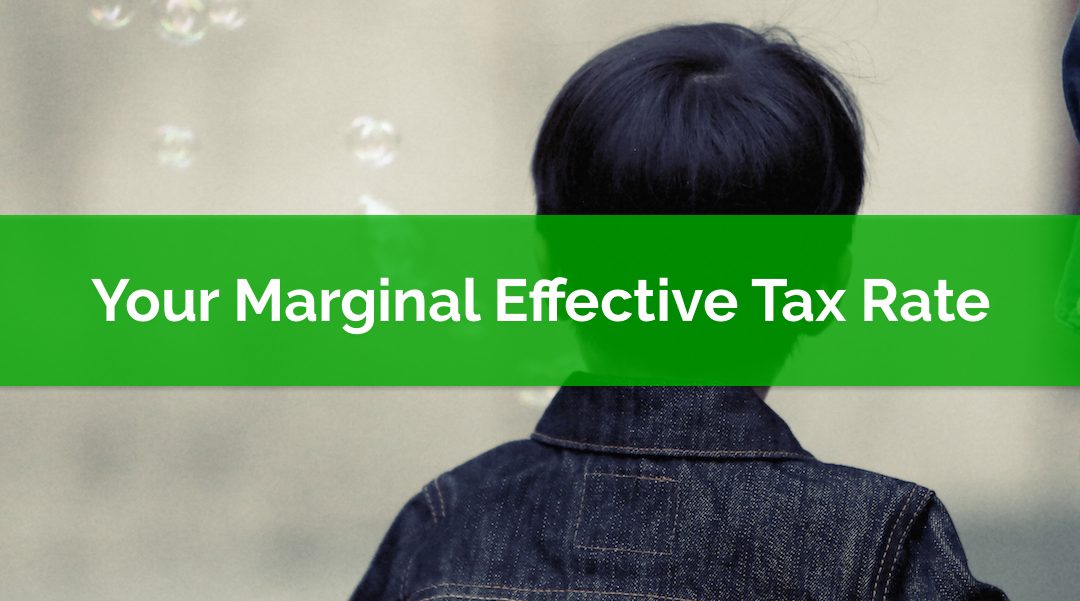 DYK? Your Marginal Effective Tax Rate Could Be 60-70%!

What is a “Marginal Effective Tax Rate” anyway, and why is it so high?!?

Well….. let’s start with a term you might be more familiar with, your marginal tax rate (no effective).

You marginal tax rate is how much tax you pay on the next dollar you earn. For high income earners this can be above 53%. For the next $100 they earn, $53 goes to taxes and only $47 goes in their pocket.

Thankfully, with our progressive tax system, low and moderate income earners pay a much lower rate, typically in the 20% to 40% range depending on their income. This means a low or moderate income household will only lose $20 to $40 of the next $100 they earn to income tax.

Your marginal effective tax rate is your marginal tax rate plus the claw back from government programs. These claw backs are based on your net income and work much the same way that income tax does, the more you earn, the more of your government benefits get clawed back.

This is a very important consideration when planning your finances. For some low and moderate income households these government claw backs can exceed 30%. This can push Marginal Effective Tax Rate (METR) over 60%. That means $60 of the next $100 they earn will be lost to taxes and claw backs!!!

A family of four earning $50,000 can easily have a marginal effective tax rate that is higher than a single person earning $220,000+.

Two things greatly affect METRs, marital status and children. These two factors affect government benefits the most so in this post I’ll look at how different family situations can affect your METR and I’ll show you in detail how I calculated the METR for my family, including the income level where each government benefit gets clawed back. 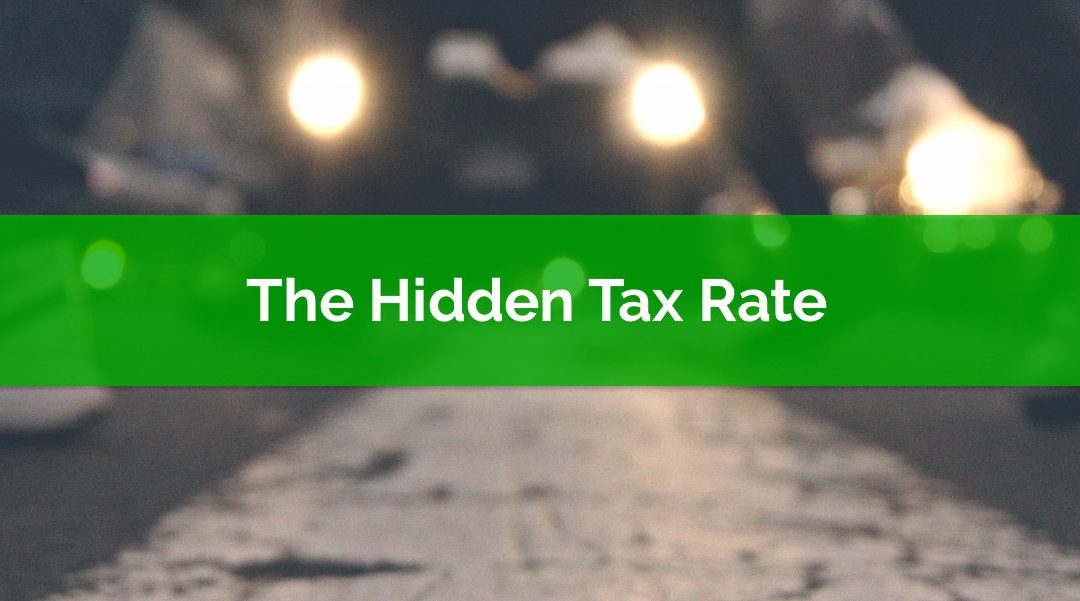 The Hidden Tax Rate: Government Programs And Their Claw Back Rates

There are many government benefit programs that are “income tested”.

You might be asking… “What does “income tested” mean exactly?!?”

This means that the benefits you receive will fluctuate with your net income.

At the most extreme, a family with two children earning around $50,000 can expect to lose 32.5% of the next dollar they earn due to these benefit claw backs. This is on top of their marginal tax rate of 29.65%. That means that between claw backs and income taxes over 60% of the next dollar earned will go to the government. Ouch!

While this is an extreme case it does illustrate the impact of these claw backs on certain income levels and family types.

The challenge with these benefits is that the calculation is often not straightforward. Specific rules and claw back rates are often hidden and not easily found. There are also considerations like marital status, number of dependents, disability, income and deductions. This makes it difficult to understand your particular claw back rate.

In addition, many income tested benefits are not based on gross income but on net income, more specifically adjusted family net income (AFNI). In the most basic sense this is your gross income minus any deductions.

One of the most interesting financial planning opportunities this creates is with RRSP contributions.

This is a BIG post, there are eight government programs we’ll cover.

For each benefit program, we include the benefit amount, the claw back rate and the income level at which the benefit disappears entirely. 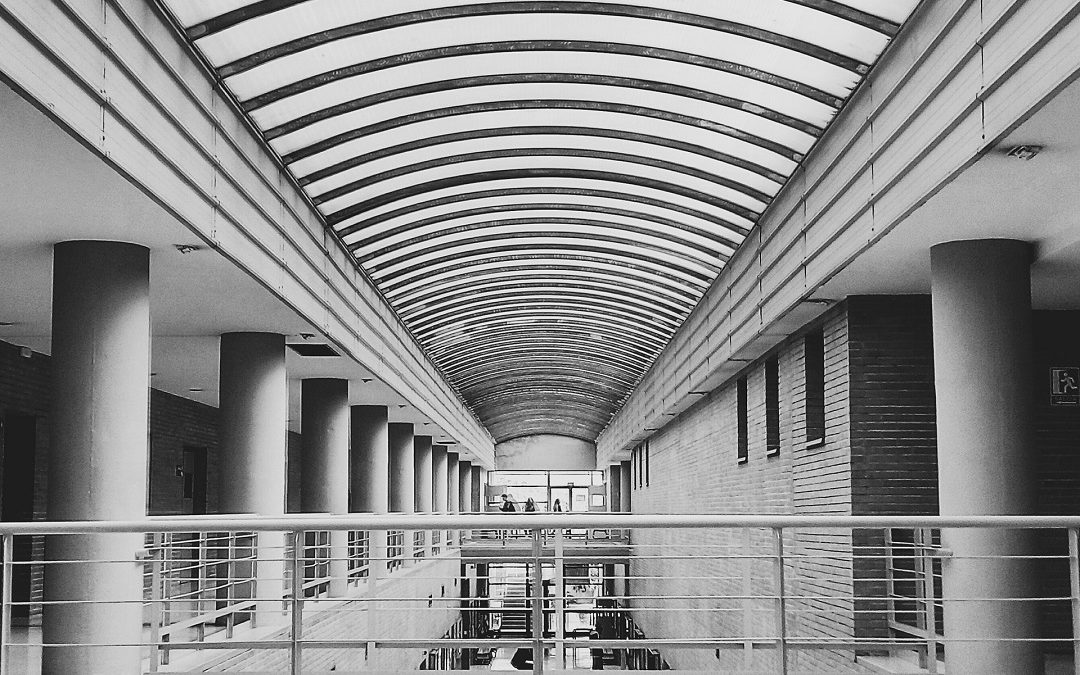 Catch-Up On Your RESP Contributions and Free Government Grants

When you first have children, there is a lot going on. Sleep deprivation, diapers, crying, screaming, feeding, more diapers, cribs, car seats, more crying. It’s overwhelming. So it’s entirely understandable that making RESP contributions for your child is the last thing on your mind.

Even for someone like me, who’s a bit of a personal finance geek, opening an RESP and making contributions was the least of my concerns. For at least 12 months I put off opening an RESP.

Putting off opening an RESP for a little while is ok. But put it off too long and you may miss some free money from the government.

Here’s what you need to know about opening an RESP, making RESP contributions and catching up on the free money from the government.